As the citizens of more and more countries across the world are struggling to deal with the effects of inflation, types of investments that provide a stable store of wealth are becoming more and more popular. Gold has always been a safe haven in times like these and one country that has had to deal with runaway inflation for a long time has just begun offering gold coins to its citizens. Inflation in the African country of Zimbabwe has exceeded 40% this year alone. As a countermeasure, the Zimbabwean government has just made new 22 karat Zimbabwean gold coins available to its citizenry.

The new Zimbabwean gold coins are nicknamed Mosi-Oa-Tunya which is the name of the world-famous Victoria Falls that are depicted on the new coins. According to this official press statement by the Reserve Bank of Zimbabwe, the new 22 karat (91.67% pure) Mosi-Oa-Tunya gold coins have an official gold weight of 1 oz. Even though the coins are primarily targeted at the domestic market, it is explicitly allowed to trade them internationally so it is only a matter of time before some online precious metal dealers like Apmex will have them listed for purchase. 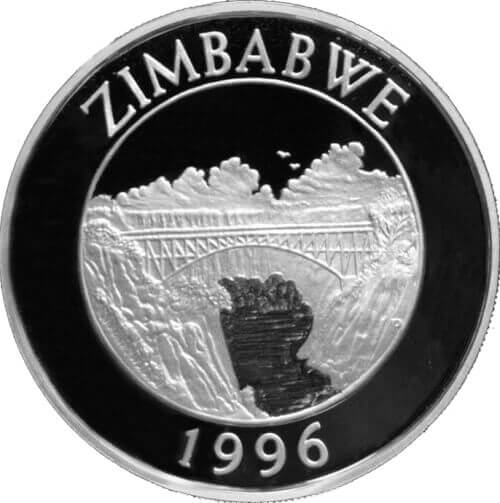 before the current issue of Zimbabwean gold coins, the country already issued silver coins back in 1996

The country of Zimbabwe already has some experience in issuing precious metal coins. Back in 1996, five different non-circulating coins out of 99.9% pure silver were issued that Australia’s Perth Mint had produced for the country. These 1 oz coins measured 40 mm in diameter and their two sides respectively depicted some of the country’s landmarks (such as the Victoria Falls Bridge and the Kariba Dam) as well as some of its wildlife. The new Zimbabwean gold coins that will be issued now however aren’t minted by a renowned foreign mint but by the Zimbabwe Mint itself that was only officially founded in the year 2001.