If you have followed this blog for some time already, then you know that we regularly highlight precious metal coins here that are special in some way. That includes coins that are special because of their design and coins that are unique because of their size (check our article about the sizes of gold bullion coins) or other features. This article introduces the new title holder in the category of the world’s smallest gold coin. Small is definitely an “overstatement” here. Tiny would be more accurate in fact. This new coin that was just released is indeed so minuscule in size that it may very well remain the world’s smallest gold coin forever.

Breaking a coin-related world record has proved fruitful for many mints to gain some media attention that may result in higher sales down the road. While there has been quite a large repertoire of different Swiss gold coins already, Swissmint has generally not been considered as one of the leading mints of the world. That may perhaps change a bit now as producing the world’s smallest gold coin with a diameter of only 2.96 mm is no mean feat! The tiny 99.99% pure gold coins weigh just 1/500th of an ounce (0.063 grams).

You may assume now that such a tiny coin can only be relatively unadorned in its design but you would be wrong! In fact, one side of the coin portrays the world-famous image of Albert Einstein sticking out his tongue. To clearly see that however you will need a magnifying glass. One such tool comes included with the package though if you were lucky enough to obtain one of the only 999 specimens of the world’s smallest gold coin. A light source is also incorporated into the packaging. Without these tools, it would be impossible to view the design of the coins! 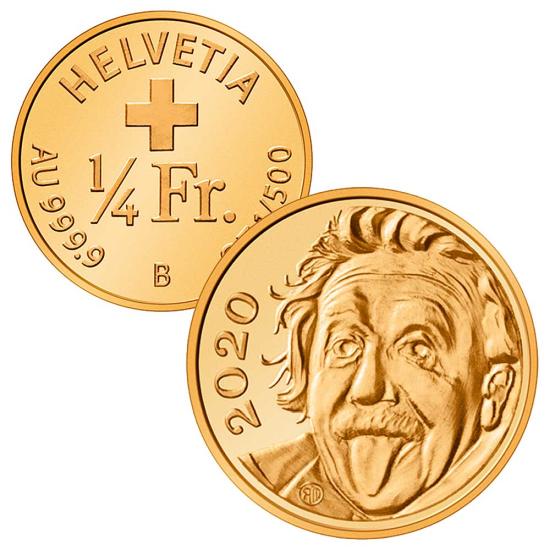 Even though each coin has a nominal face value of 1/4 Swiss francs and a gold value of only about $3, the coins were sold as collectors’ items for 199 Swiss francs ($205). All of them sold out very quickly but I would not be surprised to see some of these specimens listed on eBay or other auction sites soon for multiple times that price. After all, owning one of the world’s smallest gold coins would be a kind of status symbol among the community of coin collectors.