While it’s not unusual for collectible gold coins to feature motifs that are inspired by popular culture, there seems to be a growing trend for such coins to feature images of cartoon characters. The latest example for this are the 22 karat (so 91.67% pure) Winnie the Pooh gold coins that were just recently issued by Britain’s renowned Royal Mint. It is almost certain that these new 15.50 gram gold coins that have a denomination of 50 Pence will sell out within days.

As I’m writing this though, this limited edition of 525 proof coins (out of a total maximum mintage of 535) that is listed here on the Royal Mint’s website is still listed as awaiting stock so collectors might still have a chance. The ravenous demand for these coins seems to be unaffected by the lack of detail in the reverse design that shows Pooh enjoying a pot of honey. To be fair, the simple reverse design that shows the cuddly bear is an original E.H. Shepard design (that is now licensed by Disney) that had been created long ago for appearance in children’s books instead of on coins.

The Royal Mint’s designers like Jody Clark (whose design of Queen Elizabeth II appears on the obverse of the coins) would have probably added a lot more depth and detail to the design of these Winnie the Pooh gold coins but it seems that lack of design originality is not a deterrent when selling cartoon-inspired coins. 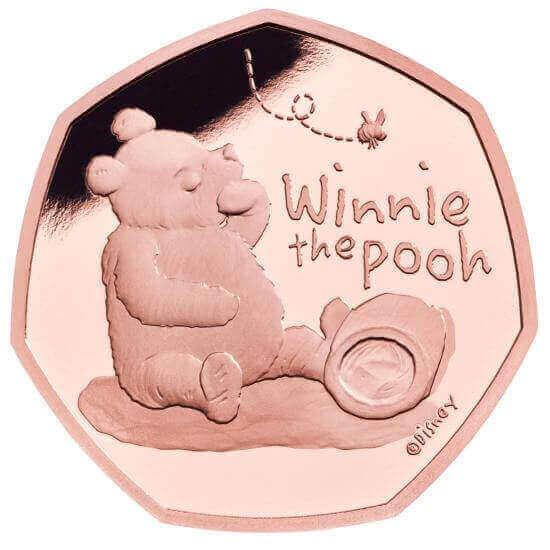 After all, when the Royal Mint issued the similarly inspired Gruffalo coins not that long ago, the design was very simplistic as well which didn’t prevent the coins from selling out very fast. For whatever reason, Disney motifs seem to be especially popular on such collectible coins and there exist entire series of Mickey Mouse gold coins as well as other collectible Disney gold coins.