The last blog article focused on why you should buy platinum. This article will be another precious metal that actually has many things in common with platinum. That metal is palladium. It is silver white in color and known for its high density. “Why buy palladium?” is the question that I will attempt to answer henceforth.

Not all of that annual demand for platinum and palladium can be met through the annual mining output. In fact in 2012, annual demand exceeded the annual mining output of platinum by 28%. Industrial demand to buy palladium was even 38% higher than that year’s supply. It is perhaps impossible to know what (already mined) reserves the leading platinum and palladium producers have stored away somewhere. It doesn’t take much guesswork though to foresee rising prices of both precious metals the more existing stockpiles near depletion.

Many people are also familiar with the use of palladium in jewelry. White gold is an alloy of gold with a white metal, most often palladium. In recent years, white gold has been a very popular choice in China for wedding rings for example. Palladium is also used in dentistry, electronics, for electrodes in medical equipment, for the inner mechanism of expensive watches and for the treatment of groundwater. The demand for palladium in so many different industries will ensure the increasing demand for this precious metal in the coming years and decades. The fact that the known palladium reserves worldwide exceed the known reserves of platinum may also convince some industries (that currently rely on platinum) to make the switch to palladium.

The currently known reserves of both platinum and palladium are roughly just about half as big as the known gold reserves. Relative scarcity usually results in a higher price, yet both platinum and palladium currently trade much cheaper than gold. Especially palladium trades far lower than it did around the year 2000, when it traded at about $1,100 per ounce at its peak. That makes palladium appear much undervalued at the moment. The market usually corrects such imbalances over time which could mean that palladium may rise substantially in value at some near or medium term in the future. 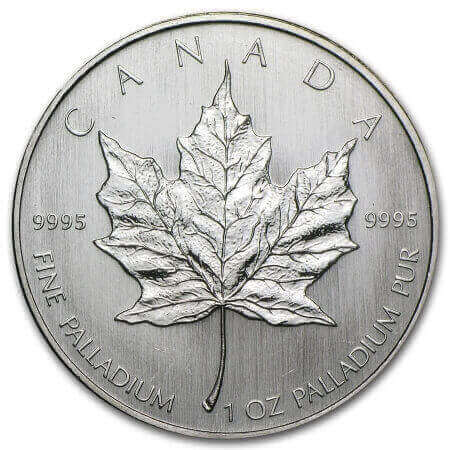 Another important factor that may contribute to a future rise in the price of palladium is that most of the world’s palladium production comes from just two countries, South Africa and Russia. Russia alone supplies about 50% of the world’s annually mined palladium. Just like OPEC can control the oil price by throttling or increasing production, Russia could do the same with palladium. Until now, Russia was willing to sell its production for whatever price the market offered. How long will it be until they figure out that they can increase the spot price of palladium by throttling their production?

Luckily, for investors who want to diversify their precious metals portfolio, there exist many options to buy palladium bullion now. Palladium bars are minted by many respected refiners in many different sizes and even a major brand of palladium bullion coin exists, the Canadian Palladium Maple Leaf coin.