As physical gold can be bought in the shape of gold coins (contemporary gold bullion coins or historic gold coins that are no longer minted), gold rounds or gold bars, gold buyers will generally decide at one point which of these options they should focus on. There are advantages and disadvantages associated with all three of these options.

Older gold coins that are no longer produced are an interesting alternative to the contemporary bullion coins. The majority of these older coins that are actively traded today were minted before 1933, most of them by the United States Mint.

There are a few historic gold coins that went out of production far more recently though. The South African 1 and 2 Rand coins for example were produced until the 1960’s. Their successors, the South African Krugerrands, are still the most actively traded gold coins worldwide and dominated the world’s gold coin market as recently as the 1990’s.

Let’s illustrate this fact with a specific example. The $20 Liberty Gold Double Eagles that were minted between 1849 and 1907 generally don’t have an added numismatic value since about 104 million such coins were produced. Any product that was produced in such abundance cannot have much if any collectible value.

However, there exists one variation of these coins that is quite valuable. The coins that were minted in 1861 with a modified reverse design by Anthony C. Paquet can fetch a collector a pretty penny at an auction these days. A $20 Liberty Gold Double Eagle with a Paquet reverse can be identified by closely inspecting the lettering as well as the position of the stars and rays on the reverse side (see images). 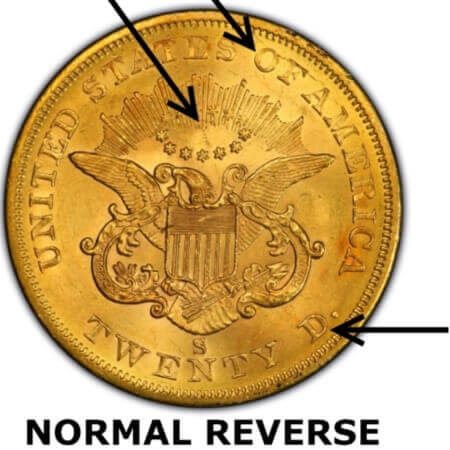 If you are lucky to find such a Liberty Gold Double Eagle with a Paquet reverse, then the first thing you should do is to check for a mint mark. If you find the one-letter mint mark S above the TWENTY D. denomination on the reverse side, then your coin specimen is one of 19,250 such coins that had been minted in 1861 at the San Francisco branch of the US Mint. Such a coin could be worth more than $ 55,000 according to this website. 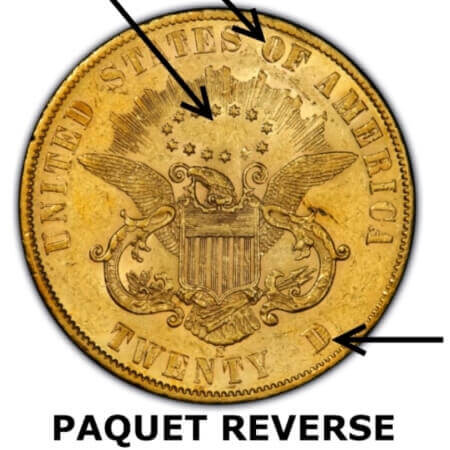 Even better if your 1861 Liberty Gold Double Eagle doesn’t bear a mint mark. In that case it was minted by the Philadelphia branch of the US Mint, that never marks its coins. Only two 1861 Liberty Gold Double Eagles with a Paquet reverse are known to exist until now. If you happen to find a legitimate third one, it would probably sell for much more than the $ 660,000 that one of the other two fetched at an auction in 1988.