After reporting on the new title holder in the category of the world’s smallest gold coins in our last article, this article is about the two unique Una & The Lion gold coins, a 5 kg and a 2 kg piece, that were just released by one of the world’s major mints, the British Royal Mint.

Both of these 99.9% pure gold coins bear the same historic design (widely regarded as one of the most beautiful British coin designs) of Lady Una and The Lion that first appeared on British £5 gold coins in 1839. To recreate this historic design, the original 200-year-old die was used and remastered.

Whereas Lady Una is a fictional character from the medieval poem “The Faerie Queene“, the Lion as Lady Una’s guardian represents England. The value of both huge gold coins far surpasses that of its face value. Whereas the 5 kg coin that has a £5,000 face value is worth about £300,000, the 2 kg coin’s value is nearly £120,000 while its face value is only £2,000!

Unfortunately, collectors won’t be able to buy either of the two coins! Three of the four minted 5 kg gold coins will effectively be destroyed by remelting them and the unique 2 kg gold coin (as well as the remaining fourth 5 kg coin) have already been sold to a private buyer. The remastered Una & The Lion design was also used on three types of proof coins, a 2 oz and a 1 kg gold coin as well as a 2 oz silver coin, that have unfortunately also all been sold. 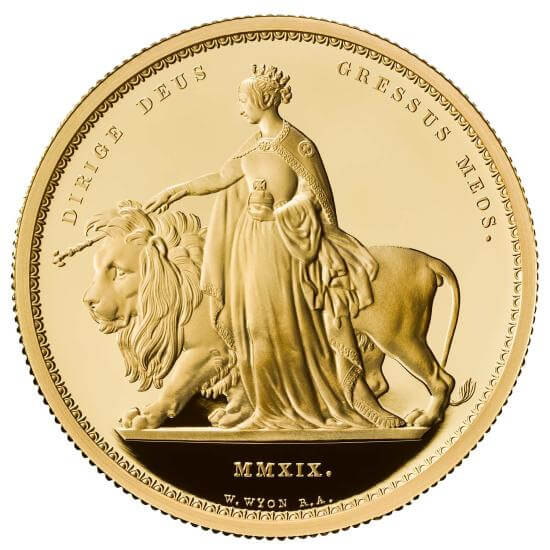 Now, some of you might rightfully be wondering who would willfully destroy such a valuable newly minted coin and for what reason. The reason is a judicial procedure known as the Trial of the Pyx whose historic roots reach all the way back to the 12th century. This trial is held once annually at the Goldsmiths’ Hall in London and its purpose is to ensure that newly minted British coins conform to the required standards.