With the Ukraine constantly being the focus of so many news stories these days due to the ongoing war with Russia, I thought it might interest some readers to know that there are some Ukrainian gold and silver coins that investors as well as collectors might be interested in buying. Apart from the 1 oz silver coins that were just issued last year to commemorate the 30th anniversary of Ukraine’s independence, the National Bank of Ukraine has issued the Ukrainian Archangel Michael coins in gold and silver since 2011.

The coins are so named because their reverse side depicts the armor-clad Archangel Michael as a warrior with a sword in his right hand. His depiction is surrounded by words from a famous Ukrainian poem. The obverse side of the coins either shows a shield with the emblem of the National Bank of Ukraine or an octagonal cartouche that is surrounded by a branch of laurel. 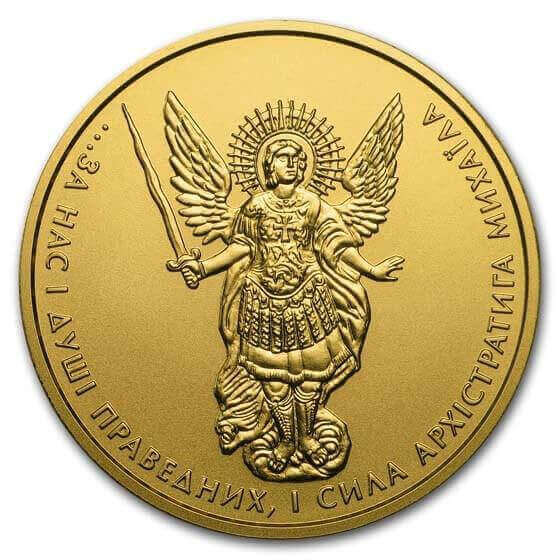 Mintage of the Ukrainian Archangel Michael coins began in 2011 and has continued until 2021. The coins are listed here on the official website of the National Bank of Ukraine. Whereas both the gold and silver version of the coins exists in the 1 oz denomination, the gold version exists in the fractional denominations of 1/2 oz, 1/4 oz and 1/10 oz as well. Both types of coins are of 99.99% purity which is on par with the much more famous gold and silver bullion coins that are issued by the most renowned government mints in the world such as Australia’s Perth Mint, Britain’s Royal Mint or Canada’s Royal Canadian Mint.

Due to their relatively low mintage numbers, it won’t be so easy for collectors to find a dealer that sells the Ukrainian Archangel Michael coins. However, the dealer Apmex has them listed here on their website even though no coins seem to be available at the time of this writing. In order to avoid the risk of buying counterfeit gold coins, it is probably not advisable to buy the Ukrainian Archangel Michael coins on eBay though. After all, the coins don’t employ any of the modern anti-counterfeiting measures that in recent years have become commonplace on such renowned bullion coins like for example the British Gold Britannias.