Even though Buy-Gold.Link is dedicated to primarily provide information about bullion coins, every once in a while a numismatic coin comes along that is so beautiful that I can’t resist writing about it here. Even better if that numismatic coin matches the bullion standard for purity as is the case with the Two Dragons silver coin that I want to recommend to you today.

So what makes this silver coin so special you may rightfully ask. In a word: Dragons! Not just one dragon but two different dragons, one of them in the style that Chinese dragons are traditionally depicted in and the 2nd dragon representing the fearsome Welsh dragon as it was depicted on battlefield banners back in medieval times. The two dragons that are depicted on the reverse side of this 1 oz coin out of 99.9% pure silver are separated by a kind of wave and appear to be looking at each other. The inscription on the top of the reverse side of this magnificent silver coin reads “TWO DRAGONS” and the coin’s weight, silver purity and year of mintage is engraved below the image of the two dragons. 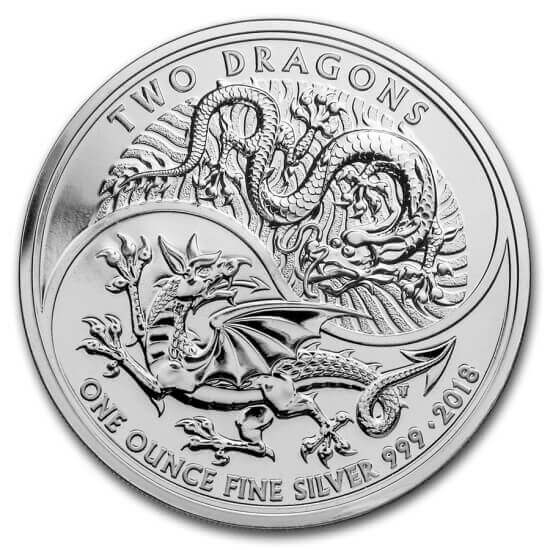 If there was an award for the most beautiful coin, the Two Dragons silver coin would be a serious contender

Since the Two Dragons silver coin is issued by Britain’s Royal Mint, it is no surprise that we find Jody Clark’s portrait of her majesty Queen Elizabeth II on the coin’s obverse side. The coin’s official face value of 2 Pounds is engraved on the reverse side as well. As with all bullion coins, that face value is largely symbolic as no one would pay with such a coin that already costs multiples of its face value if you were to buy it now. Since the Two Dragons silver coin will only be minted in very limited numbers, you can expect its trade value among collectors to rise considerably over time. Already now you would have to pay several dollars more for it than for any other of the common 1 oz silver bullion coins on the market like for example the American Silver Eagles.

So what’s the occasion for the issuance of this beautiful numismatic silver coin you may be wondering? According to the Royal Mint, the depiction of the Welsh and Chinese dragon on this coin is meant to symbolize the connection of the two cultures. Furthermore, the Royal Mint celebrates 50 years of operation at its modern home in Llantrisant (South Wales) this year. The mint is also trying to expand its bullion business into Asia, where the sale of coins is still relatively low.

Where to buy the Two Dragons silver coin?