Recently, this blog already featured two articles about unusual triangular gold coins, the Bermuda Shipwreck coins as well as the Royal Australian Mint‘s Australian Shipwreck coins. Both of these rare collectible coins are shaped like a Reuleaux triangle. Another unusual and rare collectible bullion coin that has a triangular shape is the Tutankhamun Sand Triangle coin that was issued in both gold and silver under the jurisdiction of the Isle of Man in 2009.

Mintage numbers for both the 99.99% pure gold version of the 2009 Tutankhamun Sand Triangle coin as well as the 99.9% pure silver version were very low (250 pieces for the gold and 3000 pieces for the silver version). Both types of coins were only issued with a proof finish in the single denomination of 1 oz. Even though these rare coins display the effigy of the British Queen Elizabeth II on their obverse side, they were not minted by the British Royal Mint but instead by the private Pobjoy Mint. Nevertheless, the coins have a legal tender face value. 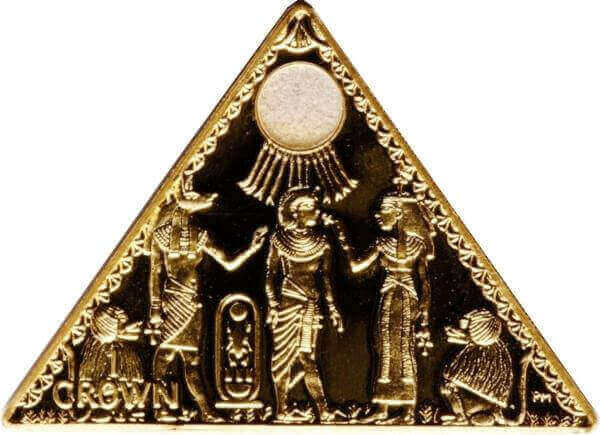 The Egyptian theme of these triangle-shaped coins is evident on both sides. Egyptian hieroglyphs surround the effigy of the Queen on the obverse side and the image of Tutankhamun as he is being welcomed into the afterlife appears on the reverse side. What makes both the silver and gold version of the 2009 Tutankhamun Sand Triangle coin truly special and unique though is that it includes real sand that was collected from Tutankhamun’s tomb! The sand is included inside a sun disc that appears at the top of the reverse side. It was personally collected by Taya Pobjoy, the Managing Director of the Pobjoy Mint.

Both versions of the 2009 Tutankhamun Sand Triangle coin will be difficult to find on the secondary market since their mintage numbers were so low. I managed to find these two listings (1st listing, 2nd listing) for the silver version on ebay though. The stunning price difference between the two listings shows that the market value of limited-mintage collectible coins (even if made out of precious metals to bullion standards) is and will always be highly subjective. People who buy precious metal coins for the purpose of investment should always stick to buying regular bullion coins which typically sell for low single-digit-percentage premiums and leave the buying of collectible bullion coins to coin collectors.