While searching online for a topic for our next blog article, I came across the website of the Worldwide Bi-Metallic Collectors Club (WBCC), the self-proclaimed first Internet Coin Club that was founded all the way back on the 14th of September 1996. It specializes in the collection of bimetallic and even trimetallic coins (including bimetallic and trimetallic precious metal coins). Specialization is a great way for a coin collector to gradually build up a complete collection of coins within that special field.

Whereas precious metal bullion coins are generally bought by investors, proof as well as commemorative precious metal coins and medallions are bought by collectors as well. Most collectors aspire to own a complete collection of a particular type of coin, for example all commemorative coins that were issued by a particular mint from a certain year on. This goal may be achievable with base metal coins or even gold and/or silver-plated coins. However, trying to accumulate a complete collection of all gold and/or silver coins that Britain’s Royal Mint has ever issued would be unaffordable for almost all collectors, even if all the coins were available for purchase from somewhere.

Both the bimetallic Panda and Maple Leaf coins are made up of a gold core and a silver outer ring. Another commonality is that the mintage numbers for both types of coins were very low. The bimetallic Maple Leaf coins were only available when buying the full set of 1.94 oz that included the six denominations of 1 oz, 1/2 oz, 1/4 oz, 1/10 oz, 1/20 oz and 1/25 oz (weight of the inner gold core). The bimetallic Maple Leaf set was issued to celebrate the 25th anniversary of the Gold Maple Leaf in 2004. That’s why the included six coins all bear the double date 1979 – 2004.

The world’s only trimetallic precious metal coins (as far as I could ascertain) are the 1 Crown coins that the private Pobjoy Mint issued in 2001. These large coins (diameter of 38.61 mm) consist of 14.2 grams of 99.99% fine gold, 11.7 grams of 92.5% fine silver and 5.2 grams of 99.95% fine platinum. A bust of Elizabeth II is depicted on the obverse side of the coins along with the lettering GIBRALTAR · ELIZABETH II as well as the year of mintage and the mint mark PM. 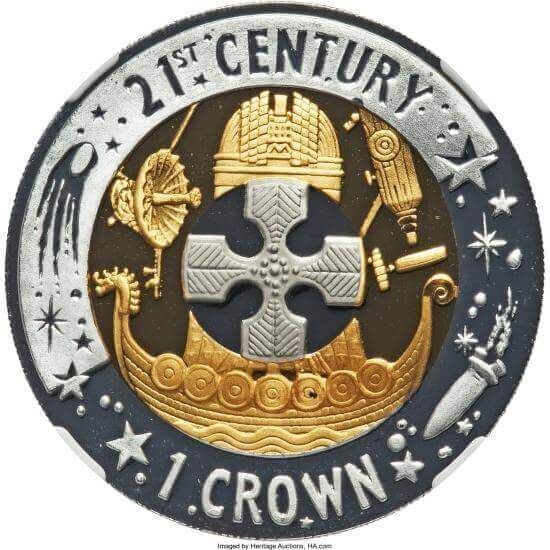 The trimetallic 1 Crown coins are dedicated to the beginning 21st century which is apparent in the design of their reverse side. It shows a Celtic cross, a Viking ship and various modern technological items such as a satellite, a space observatory and an astronomical telescope. The outer ring of the reverse side shows a rocket, a comet and various stars and planets as well as the lettering 21ST CENTURY and 1 CROWN. Only 999 such commemorative trimetallic precious metal coins were minted, all with a proof finish. If you are lucky, you might find one of these specimens listed on eBay from time to time but beware of forgeries.