Even though this website is primarily focused on precious metal bullion coins instead of collectible coins, every so often a new collectible coin comes along that is so stunning that I can’t resist writing about it here. That was the case with for example the Two Dragons Silver Coin and that is the case today with a new limited mintage collectible coin out of an unusual alloy with an even more unusual design feature. The coins that I’m referring to are the Estacado Meteorite 2019 Titanium Silver coins that are issued by the private CIT Coin Invest AG. Stunningly and possibly for the first time ever, the coin blanks are split by an artificial crack which almost reaches the center of the coin and which contains a piece of the Estacado meteorite. 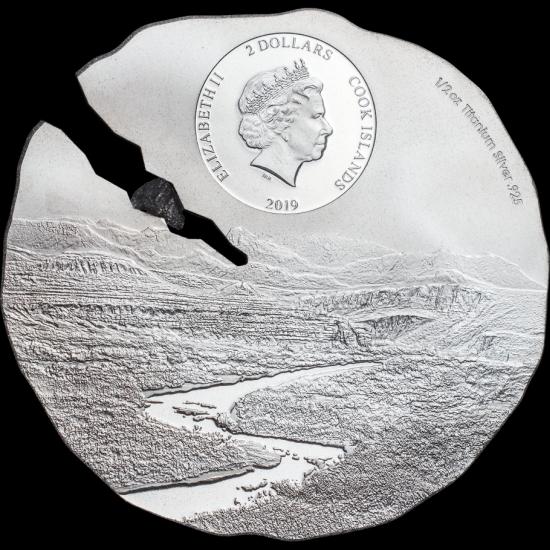 The new Estacado Meteorite 2019 Titanium Silver coins are actually a part of a coin series/collection named “Meteorite Impacts“. The first coin of this series already came out in 2004 and a new coin was added to the series every year except 2005 since then. Whereas the first coins of this series were still minted out of sterling silver (92.5% purity), the silver purity was later raised to 99.9%. Some of the coins were also copper or gold-plated but the 2019 coins are the very first to be minted out of a completely new Titanium Silver alloy.

The company that markets these coins, CIT Coin Invest AG, is based in the tiny European country of Liechtenstein. It is partnered with the private German mint B.H. Mayer Mint and this partnership has already brought forth revolutionary new minting technologies such as Smartminting© and Big Gold Minting (BGM). The CIT Coin Invest AG not only produces custom coins and high-profile collectible coins like the new Estacado Meteorite 2019 Titanium Silver coins but also ‘regular’ legal tender coins as well as medals. Since it is not a government mint, its collectible coins were/are issued under the authority of different countries such as the Cook Islands or the African country of Liberia.