Have you ever wondered which image appears the most often on precious metal bullion coins? The clear winner in that category must be America’s Lady Liberty. Not only did Lady Liberty appear in various ways on a whole range of gold coins that were minted by the United States Mint before 1933 (Liberty Gold Dollars, Liberty Half and Quarter Eagles, Saint Gaudens Double Eagles, Liberty Double Eagles and Liberty Eagles), she also appeared on pre-1933 silver coins like on the Walking Liberty Dollars. Today, Lady Liberty’s smile features prominently on American Gold Eagles, American Silver Eagles, American Platinum Eagles and American Palladium Eagles. This year, a new commemorative gold coin will show the newest interpretation of Lady Liberty.

The 99.99% pure gold coin (24 karat gold) will be released by the United States Mint in April and it will depict Lady Liberty as a black woman with a crown of stars above her on the obverse side. The collectible gold coin is struck in high relief with a proof finish at the West Point branch of the US Mint. The coin is officially referred to as the 2017 American Liberty 225th Anniversary Gold Coin. It has a gold weight of 1 oz and a $100 face value and will be the first in a series.

The words “LIBERTY” and “IN GOD WE TRUST” as well as the years 1792 and 2017 are also engraved on the coin’s obverse. Just like Lady Liberty, the eagle is another popular symbol that appears on many different coins, not just on the famous American Gold Eagles. So it doesn’t come as a surprise that the 2017 American Liberty 225th Anniversary Gold Coin will also display an eagle on its reverse side. The bold and powerful eagle that is shown in flight is surrounded near the coin’s edge by various inscriptions (UNITED STATES OF AMERICA, E PLURIBUS UNUM, 1OZ., .9999 FINE GOLD, 100 DOLLARS).

The following 24 karat gold coins in this new series will depict Lady Liberty also as an Asian-American, Hispanic-American and Indian-American woman. One such new coin is planned to be issued every two years. Confusingly, it seems unclear whether the following coins in the series will bear the same official name or whether each coin will get its own unique name. Silver medals out of 99.9% pure silver will also be issued. They will bear the same design as the gold coins.

The reason for the name and issuance of this new coin series is the US Mint’s 225th anniversary this year. Although still relatively young in age compared with Britain’s Royal Mint, the United States Mint can already look back upon a distinguished history after having been founded by an act of Congress in the year 1792. The numismatic programs that the US Mint (as a part of the Department of the Treasury since 1873) operates are fully self-sustaining and don’t require tax money. 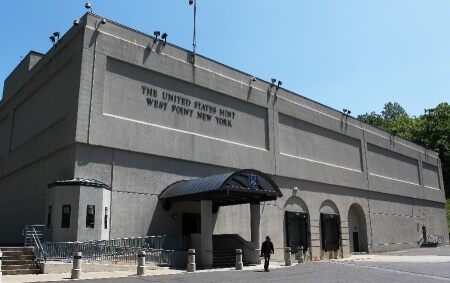 entrance to the West Point branch of the United States Mint

The US Mint’s 225th anniversary will be celebrated with an entire series of events this year. The issuing of the 2017 American Liberty 225th Anniversary Gold Coin is only the beginning of it. Additional information about the coin will be communicated by the United States Mint before the coin’s release date on April 6th.