Whereas the South African Gold Krugerrands are known throughout the world, few precious metal investors are aware of the fact that other rare gold coins also bear the likeness of Paul Kruger on their obverse. Even in South Africa, these coins aren’t that well known anymore today. The coin that I’m referring to is known as the Kruger Pond or South African Gold Pond. It exists in two denominations, the Pond and the Half-Pond. 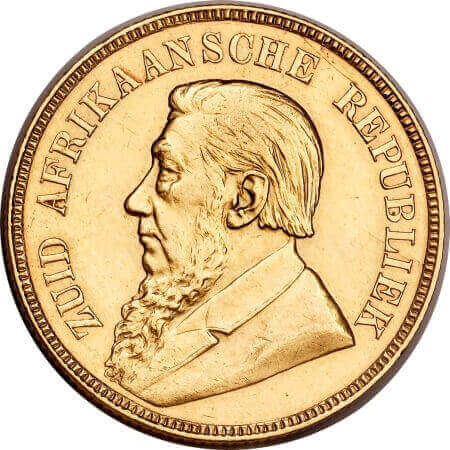 obverse side of the Kruger Pond coin

Kruger Ponds were struck by the Boers in South Africa between 1892 and 1900. The Kruger Pond is so named because it bears the portrait of the first South African President Stephanus Johannes Paulus “Paul” Kruger on its obverse side. The coin has a diameter of 22 mm and a thickness of 1.56 mm. It was minted out of 91.67% pure gold and has an actual gold weight of 0.2352 oz. The 1/2 Pond that bears the same portrait of Paul Kruger was minted between 1892 and 1897. It has a diameter of 19.4 mm and is 1.55 mm thick. The 91.67% pure Half-Pond coins have an actual gold weight of 0.1177 oz. The Half-Pond is the much rarer of the two coins since only 362,982 specimens of it were ever minted whereas more than 2.2 million 1 Pond coins exist. 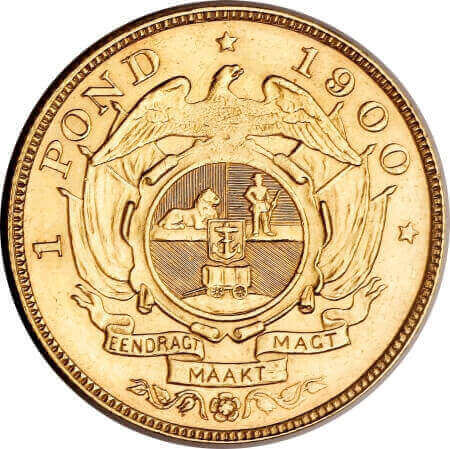 reverse side of the Kruger Pond coin

The design of both the Pond and the Half-Pond is identical though. Both coins show Otto Schultz’ portrait of the first South African President Paul Kruger on their obverse sides. The portrait is the same as that on the much more famous South African Krugerrand coins. The engraved words ZUID AFRIKAANSCHE REPUBLIEK (South African Republic) surround Paul Kruger’s portrait on the Pond and Half-Pond coins. The coat of arms of the South African Republic appears on the reverse of the coins together with the words EENDRAGT MAAKT MAGT (Unity makes strength). The coin denomination 1 Pond or 1/2 Pond and the year of mintage appear above the image to the left and right respectively.

The only 130 Kruger Pond coins that were issued in 1899 are special in the way that they were struck with dies from 1898 and later overstamped. The 99 overstamp was placed on the obverse below Paul Kruger’s bust. The first one of the 130 coins was stamped with a single 9. Since the 9 on this first coin was a bit too big and protruded into the lower part of the bust, it was decided to stamp the remaining 129 coins with smaller dies. The 129 coins with the 99 overstamp are nowadays generally referred to as the 1898 “Double nine” Ponds or the 1899 Overstamp.

The first coin that was struck with a single 9 is known as the 1898 “Single 9” Pond. It is South Africa’s rarest gold coin since only that one single specimen exists. Since 2010, it is in the hands of a private collector in South Africa who acquired it for the staggering sum of 20 million Rand.