It is generally quite rare that an established mint decides to issue a new bullion coin series. Most of the flagship coins in the bullion market can look back on a decades long history. So it must have been a delight for coin collectors (and investors looking for new investment options) worldwide when Britain’s renowned Royal Mint started issuing a new series of gold and silver bullion coins in 2016, the Queen’s Beasts coin series.

The fearsomely named Queen’s Beasts coin series started in 2016 with two gold bullion coins – a 1 oz and a 1/4 oz coin – and a 2 oz silver coin. Both the gold and silver bullion coins can boast of a fineness of 99.99%. A 1/10 oz gold coin was added to the series in 2017. All coins are available individually or in tubes.

The Queen’s Beasts coin series is inspired by Britain’s long history of royal heraldry. When Queen Elizabeth II was crowned at the Westminster Abbey in 1953, there were 10 six feet tall sculptures of heraldic beasts standing guard. These sculptures by the artist James Woodford are now on display at the Canadian Museum of History in Quebec. However, James Woodford also created stone replicas of them that can be seen at the Kew Gardens in the UK.

Woodford’s work in creating the Queen’s Beasts was inspired by an earlier generation of heraldic beasts, the King’s Beasts of Henry VIII that were commissioned in 1536 in order to celebrate the King’s marriage to Jane Seymour. Recreations of these earlier sculptures (the originals were unfortunately destroyed sometime during the late 17th century) can be seen at the Hampton Court Palace where they line the moat bridge.

So what animals are the Queen’s Beasts? The first coin that was issued in March 2016 depicted the Lion of England on the reverse side. The fearsome crowned Lion of England is depicted holding a shield emblazoned with the official Arms of the United Kingdom. 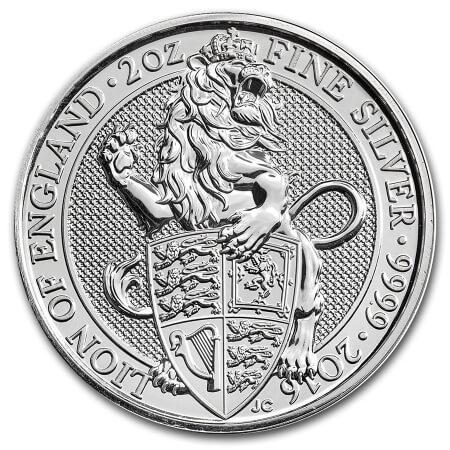 The second coin that will come out in 2017 will show the Griffin of Edward III. The griffin is displayed on its hind legs and with its wings raised. The beast’s talons are gripping a shield that bears the insignia of the House of Windsor.

In the following years, the Falcon of the Plantagenets, the Black Bull of Clarence, the Yale of Beaufort, the White Greyhound of Richmond, the Red Dragon of Wales, the Unicorn of Scotland, the White Horse of Hanover and the White Lion of Mortimer will be displayed on the reverse of the coins (not necessarily in that order). 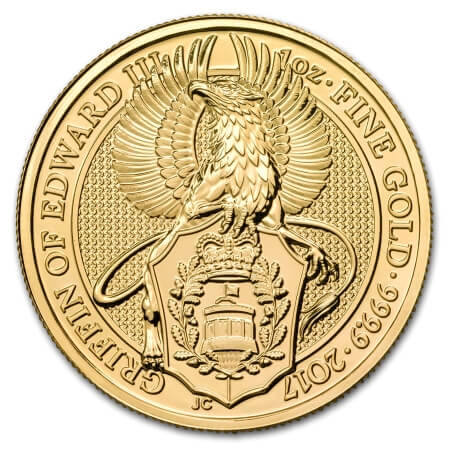 Both the obverse and reverse of the coins was designed by the Royal Mint’s Jody Clark. The same designer had created the latest 5th official coinage portrait of Queen Elizabeth II that can be seen on the obverse side of the Queen’s Beasts bullion coins as well as on the obverse of British Lunar, Britannia and Sovereign bullion coins.