An investor who is just starting out to learn about precious metals finds out very quickly that are large number of the most respected gold bar producers are based in the country of Switzerland (for example PAMP Suisse and Valcambi Suisse). Swiss gold coins are however never mentioned when the world’s top gold bullion coins are discussed. So do Swiss gold coins that meet bullion standards exist and why are they generally not sold online by established precious metal dealers?

Modern Swiss gold coins do indeed exist. They are minted by Federal Mint Swissmint, the official government mint of Switzerland. However, the minted Swiss gold coins fall into the numismatic category due to their limited mintage and lower gold purity. Just recently, Swissmint announced the release of a new 90% pure gold coin that commemorates the famous Saint Bernard dog Barry. This special breed of dogs served as rescue and companion dogs for travelers of the Great Saint Bernard Pass as early as 1695. The Saint Bernard dog Barry is believed to have saved more than 40 people between 1800 and 1812. The commemorative Barry coin has an official face value of 50 Swiss Francs and weighs 11.29 gram. It is minted in proof condition and total mintage is capped at 4,500 pieces.

The Barry coin is just one out of many 90% pure numismatic gold coins that the Federal Mint Swissmint has issued. Most other such issued coins also have a face value of 50 Swiss Francs. The first of the many commemorative Swiss gold coins with that face value was issued in 2001 and at least one new coin has been released every year since (2004 was the only year with 2 coins being released). The Barry coin is now the 18th 50 Franc coin to be released since then. All coins were minted in proof condition and the mintage limit varied between 3,940 and 10,000 pieces. This pdf shows all the 50 Franc Swiss gold coins as well as the coins mentioned in the next paragraph.

Historic Swiss gold coins were also just 90% pure. During the late 1800’s and the early part of the 20th century, the Bern Mint produced various gold coins. Of those, the 10 and the 20 Franc Helvetia gold coins can still be found in the sales catalogs of a few online precious metal dealers these days. The 10 Franc Helvetia coin has an actual gold weight of 0.0933 oz and measures 18.5 mm in diameter and just 1 mm in thickness. These 10 Franc coins were minted between 1911 and 1922. 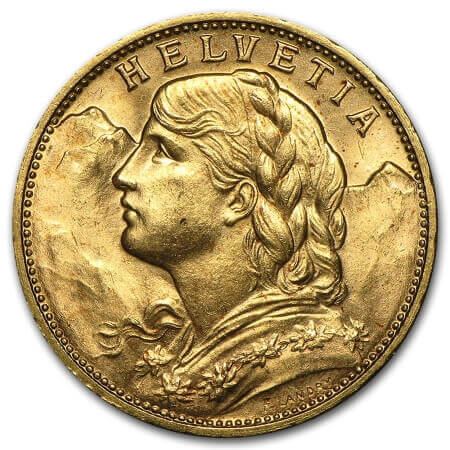 The 20 Franc Helvetia gold coins contain 0.1867 oz of gold. Nevertheless, they don’t appear that much bigger with a diameter of 21 mm (and 1.4 mm in thickness). The 20 Franc coins were minted from 1897 to 1935 and again in 1947 & 1949. Both the 10 and 20 Franc coins display a Swiss shield surrounded by oak leaves on the reverse and an allegorical female figure as the national symbol of Switzerland on the obverse. The interpretation of the “Swiss shield & oak leaves” theme on the reverse side differs markedly between the two coins though.

So why is it that all modern Swiss gold coins are of the numismatic kind (only 90% pure and only issued as proofs)? Switzerland is the home of many leading private minting institutions (PAMP Suisse, Valcambi Suisse etc.). The world market for precious metal bullion bars is largely dominated by these private mints. Could it be that these private companies hire lobbyists in order to make sure that the government mint of Switzerland won’t become serious competition (if it started issuing bullion coins)? Or does the Federal Mint Swissmint lack the technical equipment or skill to produce high-purity bullion coins? That second possible reason seems highly unlikely to me.