Just like all the other chemical elements in the periodic table, the origin of all gold that has been created in the universe lies in outer space. Even though gold is relatively scarce since only a few cosmic prevents can create it, there seems to be more space gold in existence than the current scientific models can explain.

I recently discovered a website by a coin collector that is dedicated to space coins. The website and the community it caters to is focused on collecting various numismatic coins that incorporate pieces of meteorites and/or items that have flown in space.

This seems to be a thriving niche in the market for collector coins. There are a surprising number of coins on the market that incorporate tiny pieces of meteorites and I already reported about one such example in this blog in the past. Other collectible coins incorporate material that has flown in space. 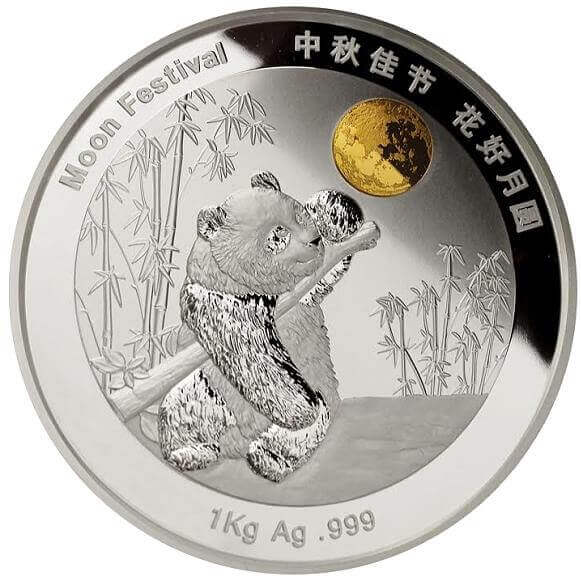 The golden moon in this coin is made of real “space gold” in the sense that it has flown in space for 69 months!

One stunning collector coin out of silver that the China Mint has produced even includes gold that has flown in orbit around Earth. The bimetallic 1 kg Moon Festival Panda 2015 incorporates 1/10 oz of 24 karat gold that had spent 69 months in space for research purposes outside the International Space Station. This beautiful coin is also mentioned on the pages about the Chinese Gold Pandas and Chinese Silver Pandas on this website. As far as I know, it is the only gold coin that incorporates or is made of gold from space or gold that has flown in space.

That might change in the future though if/when humanity begins to mine asteroids in space. The U.S. Commercial Space Launch Competitiveness Act that was passed into law in 2015 legalized the mining of asteroids in space. If it really becomes possible and commercially viable to mine asteroids for their minerals in space some day, then perhaps much of our circulating currency will be made out of such metals in the future. One asteroid that contains more than enough space gold for such a purpose has already been identified.