Coin series with annually changing animal images are perhaps the most popular series of precious metal bullion coins these days. The China Mint was the first to explore this when it launched its Chinese Panda coin series in 1982 and Australia’s Perth Mint followed a few years later when it switched its Australian Nugget coin series to images of kangaroos. Even mythical animals that don’t exist sell well on coins as the Royal Mint‘s Queen’s Beasts coin series proves. Since its launch last year, the South African Mint has now also found great success with an animal-themed bullion coin series (albeit a series primarily aimed at collectors), the South African Big Five Series.

As the name already implies, the coins of this series will depict in succession the “Big Five” of African Wildlife, so the lion, leopard, rhinoceros, elephant and buffalo. A new coin design is scheduled to be released every 6 months in this series. The series started in 2019 with the release of the elephant coin and was followed up with the lion coin that same year. The current year 2020 already saw the third coin of the series released which depicted the rhinoceros. 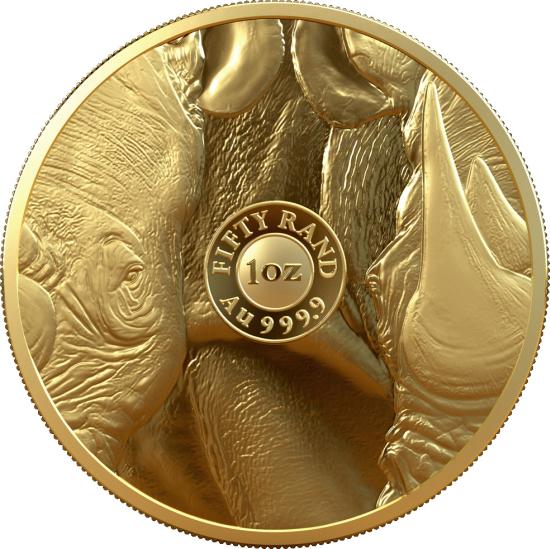 What I find most impressive and original about the design of these coins is how they always juxtapose two halves of the animal’s face on their reverse side. If you were to place two coins next to each other, you would be able to see the full face. The close-up portrait of the animal on the obverse side is also far more detailed than on other animal-themed bullion coins.

The coins of the South African Big Five Series are available in gold (99.99% purity), silver (99.9%) and platinum (99.95%). Only 1 oz coins are minted of each metal and whereas the silver version is available as both brilliant uncirculated and proof coins, the gold and platinum version only exists as proof coins. What’s more, mintage of the 1 oz proof gold and platinum coins is restricted to only 500 coins for each design. The brilliant uncirculated silver version of the South African Big Five Series coins is therefore the most easily available with a mintage of 15,000 coins per design. The 1 oz silver proof coins are not available individually but only as a part of limited issue proof sets.

All in all, there exist 3 different types of proof sets for the coins of the South African Big Five Series. The first is a 2-coin silver proof set that includes two 1 oz Big Five silver coins that are placed right next to each other in the box (limited issue of 1,000 sets for each design). Then, there are two types of combination sets.

The silver combination set is the more easily obtainable among them since its issue limit is 1,000 sets. It includes a 1 oz proof Silver Krugerrand coin with a special privy mark (in the shape of the respective Big Five animal) along with the 1 oz Big Five silver proof coin. The issue limit of the gold combination set is much lower with only 100 such sets being issued for each design. It is composed of the privy-marked 1 oz proof Gold Krugerrand along with the 1 oz proof Big Five gold coin.