As a generalization, one might say that the precious metal coin market is dominated by the government mints of some of the most developed nations in the world like the United States, Australia, the United Kingdom and the emerging superpower China. Granted, some mints from developing countries also play a major role like the South African Mint or the Mexican Mint. Most third-world countries however don’t issue any precious metal coins as they don’t even have the required minting technology. A rare exception to this trend are the Somalian Elephant gold coins.

Investors might rightfully wonder how an unstable country like Somalia can produce and market gold coins. The answer to this question is quite simple in that the Somalian government has outsourced the production of the Somalian Elephant gold coins to the Bavarian State Mint in Germany. That practice is actually quite common. Many less-developed countries have some or even all of their coinage (circulating coins as well as bullion and commemorative coins) produced by the leading government mints of the world such as the Royal Canadian Mint or Australia’s Perth Mint. These famous mints actively compete to obtain such lucrative government contracts from developing foreign nations.

The case of the Somalian Elephant gold coins is peculiar in that the Bavarian State Mint at first produced coins with the same elephant design for the African nation of Zambia (from 1999 until 2003). Since 2004, the mint produces the coins for the African nation of Somalia. However, only a silver version of the coins was issued during the first 5 years of this coin program from 2004 to 2008. Mintage of these 99.9% pure Somalian Elephant silver coins was capped at 5,000 coins per year. The annually changing reverse design of the coins contributed to their rising popularity. Even though the different designs all show an African elephant in its natural habitat, the actual interpretation of this theme always differs from year to year. The obverse side of the coins however always looks the same in that it features the official coat of arms of Somalia. 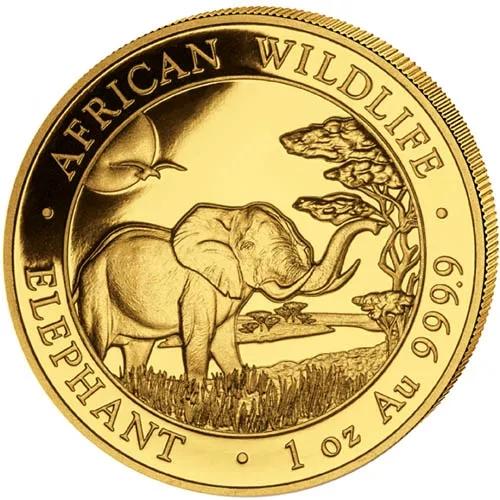 Following in the footsteps of the success of the silver version, the Bavarian State Mint introduced the gold version of the coins in 2008 (a gilded version was also minted from 2013 to 2015). The coins are minted out of 99.99% pure gold and both bullion and proof coins are produced and issued. Investors will probably most easily find the 1 oz Somalian Elephant gold coins in the inventory of online gold dealers. However, various fractional sizes are minted as well such as 1/50 oz, 1/20 oz and 1/10 oz coins. The largest version of the Somalian Elephant gold coins are the 5 oz proof coins of which only 99 are produced annually.

Despite the relative popularity that the Somalian Elephant gold coins have gained in the market for precious metal coins, there is some controversy surrounding the coins. First of all, the official face value of the coins (1,000 Somali Shillings for the 1 oz coins) is disputed. The governor of the Central Bank of Somalia has in fact denied that the coins have any legal standing in Somalia. Secondly, the supposed government official that signed the letter that authorized the Bavarian State Mint to produce the coins may not exist as a real person. Somalia is known as a country where corruption reigns supreme so it may not be too far-fetched to imagine that some government officials or even local warlords made up the authorization letter in order to enrich themselves from the sale of the coins.

What makes this scenario even more likely to be true is the strange fact that the Bavarian State Mint makes no mention of the Somalian Elephant gold coins anywhere on its website. Therefore I would like to caution investors from adding the coins to their portfolio. Any profit from the sale of the coins might fuel corruption in Somalia, already one of the poorest countries in the world. That’s really a pity though considering the beautiful design and the quality of the coins. However, in a world of increasing transparency I find it unacceptable that a renowned mint like the Bavarian State Mint somewhat secretly continues to maintain such a shady business relationship.