Most gold bullion coins are offered in the standard sizes of 1 oz, 1/2 oz, 1/4 oz, 1/10 oz and sometimes even 1/15 oz and 1/20 oz. If you were to think that these are all the sizes that exist, you would be mistaken. So what are the biggest and smallest sizes of gold bullion coins? I’m glad you ask and I will answer this question in this article.

The Perth Mint offers its two flagship coins, the Australian Kangaroo and the Australian Lunar gold coins, in a whopping 10 oz size. Instead of that size, The China Mint chose the somewhat odd size of 12 oz for its Chinese Gold Pandas. The Austrian Mint tops that easily with its Austrian Gold Philharmonic coin of 20 oz and that is not even the largest gold coin in the Philharmonic family. 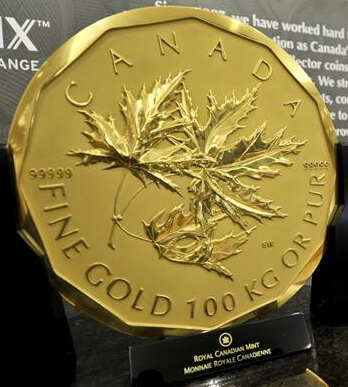 The Australian Lunar gold coins have a 10 kg version available every year, albeit in extremely limited mintage. The Austrian Mint almost tripled that in 2004 with a 1.000 oz Austrian Gold Philharmonic coin, nicknamed “Big Phil”. The biggest gold bullion coin that was ever minted though was a 100 kg Canadian Gold Maple Leaf in 2007.

I just found out that there is an even bigger gold bullion coin. The Perth Mint produced a gargantuan 1 tonne Australian Gold Kangaroo coin in 2011. The beast of a coin measures about 80 cm in width and more than 12 cm in thickness. It is undoubtedly the biggest and heaviest gold coin in the world and has been recognized by the Guinness Book of Records as such.

So what are the smallest sizes of gold bullion coins then? The Austrian Gold Philharmonic and the Canadian Gold Maple Leaf are offered in the odd size of 1/25 oz. That’s already small but it’s not even the smallest size for the Canadian Maple Leaf gold coins. They also exist as 1 gram coins. Fitting the detailed image of a maple leaf on such a small coin might already be a technological challenge. How about a chubby panda then? Yet, the 1 gram Chinese Gold Panda coins are only tied for 3rd place with the Gold Maple Leafs when it comes to finding the smallest sizes of gold bullion coins.