When most people think of precious metal coins, they picture coins that are made out of gold or silver. Most serious precious metal investors however know that platinum bullion coins and palladium bullion coins exist as well. There are other precious metals though such as rhodium or niobium that are hardly known among the general population. Pure niobium coins don’t exist as of now. The European countries of Austria and Luxembourg have however found great success with their issue of collectible silver niobium coins.

The Austrian Mint that is well-known among precious metal investors for producing the Austrian Gold Philharmonics and Austrian Silver Philharmonics produced the world’s first bimetallic coins out of silver and niobium in 2003. These coins that have a silver outer ring out of 90% pure silver and a coloured 99,8% pure niobium core were dedicated to Tyrol‘s town of Hall that celebrated its 700-year anniversary of being recognized as a city that year. The reverse side of the coins shows a map of the town as it is being measured by a satellite from space. 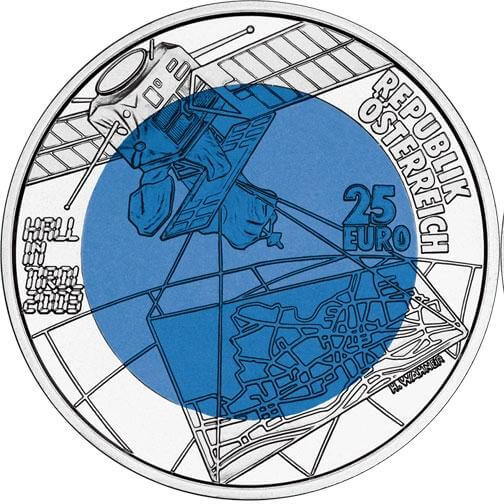 The Austrian Mint’s bimetallic coins measure 34 mm in diameter and have an official face value of 25 Euros. The coins weight of 16.50 grams is made up of 7.5 grams of niobium and 9.0 grams of silver. Annual mintage numbers of these collectible coins started out with 50,000 coins in 2003 and then increased to 65,000 coins the following year. Mintage numbers have remained at that level since then.

Since the metal of niobium has important uses in the space industry, many subsequent editions of these bimetallic coins that have been issued in every year since the inaugural 2003 release depict themes related to science and the exploration of space as well. The current 2022 edition of the coins for example depicts an alien from space as it is holding the earth in its hands on the obverse side.