The obverse design that appears on all of the Seated Liberty silver coins was designed by US Mint engraver Christian Gobrecht and drawn by Thomas Sully. It depicts Lady Liberty in a flowing dress seated upon a rock. She holds a Liberty pole surmounted by a Phrygian cap in her left hand while her right hand rests on top of a striped shield that has the word “Liberty” inscribed on a diagonal banner. The date of mintage appears underneath this Seated Liberty design on the obverse side of the coins. 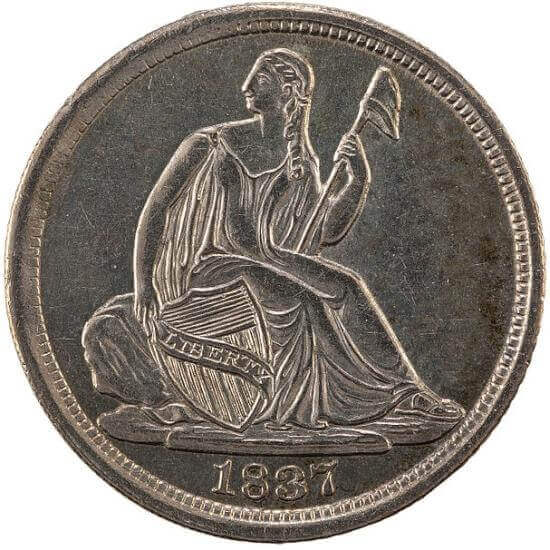 Most of the Seated Liberty silver coins have a few things in common. One of them is that some of these coins had their weight reduced in 1853. The Seated Liberty Half Dimes for example had their weight reduced from 1.34 grams (until 1853) to 1.24 grams (since 1853). The reduction in weight was done because of rising silver prices at that time. It is quite easy to distinguish the coins with the reduced weight from those with the original weight though (even if they were both minted in 1853). The coins with the reduced weight have a pointed arrow on each side of the year of mintage underneath the Seated Liberty design whereas there are no such arrows on the coins with the original weight.

The six different Seated Liberty silver coins were minted by four different branches of the US Mint, its main branch in Philadelphia as well as its branch mints in New Orleans, San Francisco and Carson City. If you happen to find a 1864-S Seated Liberty Quarter in your attic, you can consider yourself very lucky as these low-mintage coins have fetched high prices in previous auctions.

You would be even luckier if you found a (genuine) Seated Liberty Half Dime that was minted in 1870 and bears the S mint mark for the San Francisco branch of the US Mint. Only one such coin is known to exist. (Officially, the San Francisco Mint didn’t mint any Seated Liberty Half Dimes in 1870 but the authenticity of the coin has been somehow verified.) In 2009, the sole known 1870-S Seated Liberty Half Dime was sold at an auction for 1.4 million USD. A second such coin is believed (or rumored) to exist and if you happen to find it, it could presumably fetch even more at an auction these days. Perhaps it might be even better though to auction off your numismatic treasures when life has returned to normal post-Covid.