The recent market introduction of the American Palladium Eagles is undoubtedly a sign that palladium as a precious metal is becoming more attractive to investors. That’s why it might be interesting for our readers to hear about a historic palladium coin series. The Russian Ballerina palladium coins are not only beautiful to look at but also interesting from a historic point of view. After all, these coins were minted at a time of sweeping political changes that culminated in the collapse of the Soviet Union.

The national mint in St. Petersburg (then still named Leningrad) began issuing the coins in 1989. The Soviet Union was already facing economic and political struggles that year that ultimately led to its collapse in 1991. Instead of minting the coins out of silver or gold like most other government mints would have done, the Soviet Union chose palladium. The reason for this was that the Soviet Union operated the largest palladium mines in the world. The same is still true today with the Russian company MMC Norilsk Nickel contributing about 41% of the world’s palladium production. Mintage of the Russian Ballerina palladium coins continued until 1995.

The 99.9% fine Russian Ballerina palladium coins were issued in the sizes of 1 oz, 1/2 oz and 1/4 oz. The obverse side of the coins always shows a Russian Ballerina as a tribute to the world-famous Bolshoi Ballet. The Russian words for Russian Ballet surround the Ballerina design which differs from year to year. The 1989 coins for example show a female ballerina dancer en pointe with her arms wrapped around her torso. Even though the dancer’s posture is different from year to year, she always represents the role of Odette from Swan Lake. 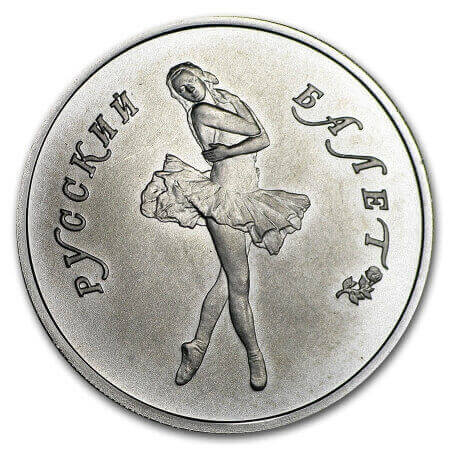 The reverse side of the coins at first featured the hammer and sickle as symbols of the Soviet Union above the letters CCCP and the year of mintage. After the fall of the Soviet Union, the coins depict a double-headed eagle as the Russian Coat of Arms on the reverse. That 2nd reverse design appears on the coins since 1992. The face value, year of mintage and the Russian words for Bank of Russia appear in a circle around the edge of the coins on this 2nd reverse design.

The palladium weight and purity as well as a mint mark appear in very small size on the reverse as well. The 1 oz Russian Ballerina palladium coins have an official face value of 25 Roubles that is guaranteed by the Bank of Russia. The face value of the 1/2 oz and 1/4 oz coins is 10 Roubles and 5 Roubles respectively.