As already discussed in previous articles, one proven way for a mint to increase its sales is to issue special collectible versions of its bullion coins. No matter whether these coins distinguish themselves from the regular bullion coins by a special finish, the addition of a mint/privy mark, the selective application of color to the design or some other ways, such limited-mintage collectible coins usually sell out very quickly. The US Mint is capitalizing on this type of marketing/product development once more this month through the issue of a limited mintage of reverse proof American Silver Eagles that will only be available in a set.

Sales of the American Eagle 2021 One Ounce Silver Reverse Proof Two-Coin Set Designer Edition just started yesterday and no more than 125,000 such sets will ever be produced and issued. The two reverse proof American Silver Eagles that are included in this set were both minted in 2021. The first coin that bears the original reverse design (Type 1) was struck at the West Point branch of the US Mint and the second coin with the new reverse design was minted at the San Francisco branch. The two coins bear the respective mint marks “W” and “S” accordingly on their reverse sides. Each coin is individually encapsulated and the two coins are packaged together in a black presentation case along with a certificate of authenticity. 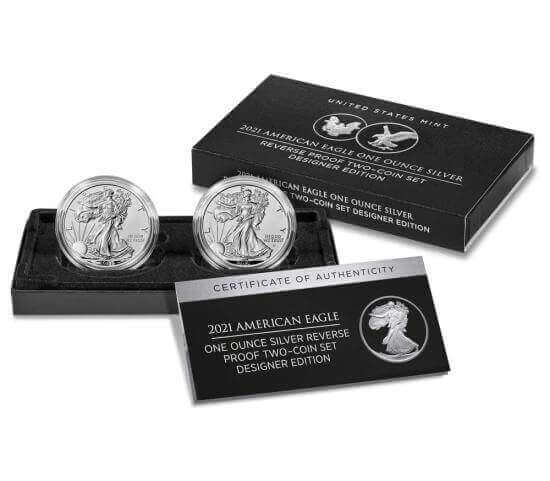 In case you were wondering, this is not the first time for the US Mint to release a limited mintage of collectible reverse proof Silver Eagle coins. Such coins were most recently issued in 2019 (enhanced reverse proof coins) but previous issues also happened on occasion of the 20th and 25th anniversary of the Silver Eagle coin program in 2006 and 2011 as well as for the 75th anniversary of the San Francisco and West Point branches of the US Mint in 2012 and 2013. In almost all cases, such reverse proof American Silver Eagles were only available as a part of a set. The only exception so far were the 2019-S enhanced reverse proof Silver Eagles that were available for individual purchase.