No matter whether you’re a bullion dealer or bullion investor, being sure of the authenticity of the bullion products you sell/buy is of primary importance. In recent years, the number of counterfeit bullion bars and coins that entered the market has steadily increased. That has forced bullion producers to augment their anti-counterfeiting measures and that process is still ongoing. It is arguably harder to stop counterfeit bullion coins than bars because it is in principle legal to produce replica coins.

Why some numismatists buy replica coins?

The famous design of certain bullion coins and historic coins is copied by both legitimate private mints as well as coin forgers worldwide. The idea behind owning a legal replica coin is very simple and it has nothing to do with investing. Many famous historic coins have become too rare and therefore too expensive for most numismatic collectors. Bullion coins are available in abundant numbers on the other hand but are generally too expensive for the average numismatic collector. Silver bullion coins as well as very small gold/platinum/palladium bullion coins (e.g. 1/20 oz coins) are the exception to this rule.

So what are the options for a collector who for example likes the Springbok design on the reverse of the South African Krugerrands but doesn’t want to spend 1,200 USD or more for a 1 oz coin. (At the time of this writing, the spot price for 1 oz of gold is 1192.09 USD.) Very simply, such a collector who primarily buys coins for enjoyment and not investment might consider buying a Krugerrand replica coin.

The 1 Ounce Gold South African Krugerrand Coin Replica that is listed among other replica coins on this page costs less than 4 USD and is perfectly legal to buy/sell since it is clearly marked as a COPY on the obverse side underneath the image of Paul Kruger. The coin has a base metal core that is (very thinly) plated with gold. As an investment, this coin is absolutely worthless, have no illusions about that! However, replica coins such as this one allow hobby numismatists to enjoy the cherished design of famous bullion coins that are too rare and/or expensive to buy.

There are plenty of private mints that produce and market replica coins legally by following the relevant laws and stipulations. If a coin design is not copyrighted (and few are), it is perfectly legal to use it to produce replica coins with that design. While there are plenty of legal replica coins, there are also illegal ones. The difference between the two is that a legal replica is clearly marked as such whereas an illegal copy is pretending to be the original. A legal replica coin will have the same design as the original but it will be marked as a “COPY”. The United States of America have clearly codified this in part 304 of the Hobby Protection Act:

(a) An imitation numismatic item which is manufactured in the United States, or imported into the United States for introduction into or distribution in commerce, shall be plainly and permanently marked “COPY”.

The word “COPY” must be written in English in capital letters on either the obverse or reverse side of the replica coin itself. The Hobby Protection Act was amended in 2014 by the Collectible Coin Protection Act (H.R.2754) whose legalistic stipulations allow the Federal Trade Commission to better protect consumers from being defrauded. 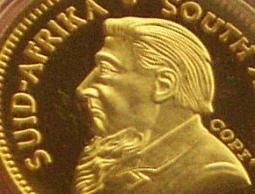 A legitimate replica will also often be of different dimensions than the original coin, often bigger but sometimes also smaller. As with the Krugerrand replica coin mentioned above, it is quite common that legitimate replicas of gold coins are made out of gold-plated silver. Sometimes, legitimate replicas of gold coins are also made out of lesser-purity gold than the 22 or 24 carat of the original coins. In Arabic countries, they often use 21 karat gold to produce such replicas. Replicas out of 18 or 20 carat gold also exist on the market for such coins.

Whereas fraudulent replica coins were relatively easy to spot in the past, they are nowadays often virtually indistinguishable from the original coins so that even experts can’t identify them. The fight against the counterfeiting of bullion coins is made harder by the fact that simple (and inexpensive) anti-counterfeiting measures that are used for bullion bars like verifiable serial numbers cannot be applied to bullion coins.

Whereas the appearance of most coins can be faked relatively easily these days, it is much harder to replace the precious metal in a coin with cheaper materials and still end up with the same weight. Yet some expert forgers achieve even that. Coins have been found with cheaper materials such as titanium, copper, bronze, lead or tungsten inside of them underneath their thin gold-plating so beware!

Some government mints like the Royal Canadian Mint have added special design features like radial lines and micro-engraved privy marks to their bullion coins in an effort to make it much harder for forgers to duplicate the exact design of the original coins.

The newest anti-counterfeiting measure of the Royal Canadian Mint is the Bullion DNA Dealer Program. Precious metal dealers worldwide can register for this program with the mint. Its primary benefit is that it will give the registered dealers access to the mint’s innovative Bullion DNA Reader Technology. With this technology, dealers can ensure themselves of the authenticity of all Gold Maple Leaf coins (that were minted since 2014) and Silver Maple Leaf coins (minted since 2015).

Unfortunately, there are still many businesses that produce replica coins without marking them as such, especially in China. Not marking a replica coin is legal in China, as long as the coins are sold as replicas. Such coins will then be bought by unscrupulous individuals on websites like Taobao or Alibaba.com and then imported into the United States. The fraudsters will then try to sell the fake coins individually on eBay for prices close to what the real coins would cost without disclosing them as replica imitations.

The online auctioneer eBay has certainly gotten better at identifying these fraudulent sellers, but there are still plenty of unmarked replica coins sold on the site. As a general rule, Buy-Gold.Link advises to only buy bullion products from respected precious metal dealers and never from sites like eBay. Have a look at our product pages! We’ve made it easy for you to compare the prices from some of the most respected dealers in the business.