Investors that buy larger gold bars generally don’t care about the design of these bars. However, there is a sizable market for small and thin gold bars with artistic designs. These bars are often bought as gifts and their new owners often use them as amulets or bookmarks. Various types of designs are used on such gold bars and the themes range from romance to religion. This article will introduce some religious gold bars that devotees might want to own or offer as gifts to their friends and/or family members.

The Christian cross might very well be the most common design that appears on such religious bullion bars. The choice between different bullion bars that bear the cross is perhaps even greater for silver bars than gold bars. You can also find gold and silver bars that bear pictures of Islamic or Jewish religious symbols, the Buddha or various Hindu deities like Lakshmi or Ganesh. 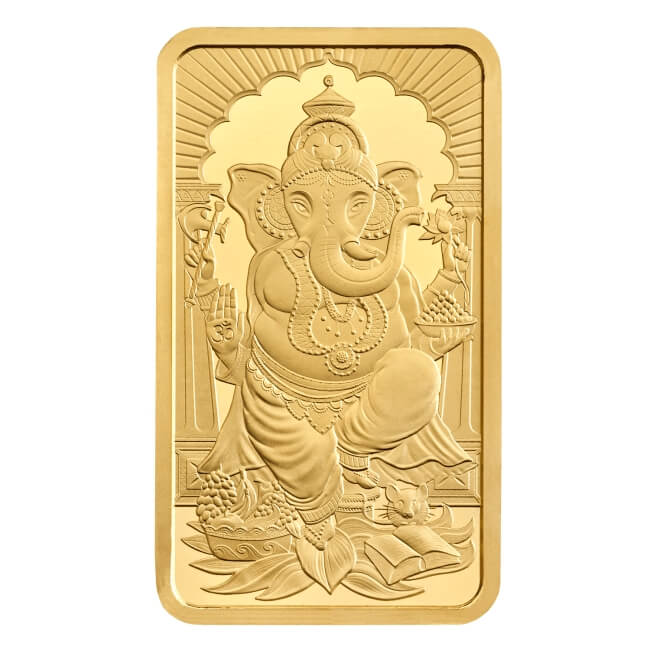 As an example for the latter, Britain’s esteemed Royal Mint just recently issued 99.99% pure 20 gram gold bars that bear the image of Ganesh, the Hindu god of luck and new beginnings, on their obverse side. The design of the bars was created in collaboration with Nilesh Kabaria from the Shree Swaminarayan Temple in Cardiff, Wales. On the reverse side of each of these religious gold bars, you will find a unique serial number. The bars measure 31 mm x 18 mm and are 2.1 mm thick. You can buy them directly from this page on the Royal Mint’s website and they would make a great gift for an Indian friend on such occasions as Diwali, the sacred festival of lights.

The new Ganesh-themed gold bars are not the only religious gold bars that the Royal Mint has released in recent years though. There also exist 20 gram gold bars that feature the image of Lakshmi, the Hindu goddess of wealth, fortune and prosperity. These bars have the exact same specifications as the Ganesh gold bars and are still available for purchase on this page of the Royal Mint’s website.