Compared to other metals like copper, gold coins and bars withstand time quite well. However, there are also some issues relating to the “aging” of gold that need to be considered. One such issue is the appearance of red spots on gold coins after some time.

These red spots appear where there are higher concentrations of copper in the coin. The higher the gold purity of the coin, the less likely it is that such spots will occur over time. Many of the most popular gold bullion coins of our time are 22 karat coins such as American Gold Eagles and South African Gold Krugerrands. These 22 karat coins contain 91.67% gold and 5.33% (Gold Eagles) or 8.33% (Krugerrands) copper.

As a result of the smelting process, the copper atoms may end up unevenly dispersed within the coin, leading to areas with a higher copper concentration. That is because gold (1.064 °C) and copper (1.085 °C) as well as silver (961,8 °C) ,which is the 3rd precious metal in American Gold Eagles, all have different melting points.

When the atoms begin to cool down after the smelting process, crystallization occurs and since copper has the highest smelting point, it will begin to crystallize first. The areas with slightly higher copper concentrations in the coin can show up as red spots if those areas are close to the coin’s surface. These red spots tend to tarnish with age which makes them appear in a deeper red or even brown color. So, the older the gold coin is, the more tarnished red spots can appear and they can also appear to grow in size a bit. Mostly though, the red spots appear in about the size of a pinhead. 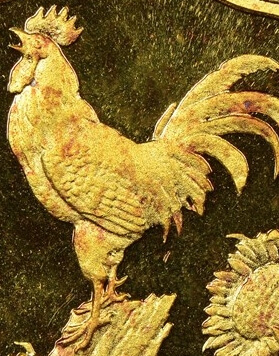 Some gold coin collectors are perturbed by the appearance of these red spots on their gold coins and try to remove them in a variety of ways, some of which may end up damaging the coin. Yes, there is a proper way to remove these red spots on gold coins but it is better left to the experts. Should you decide to try the following method yourself, remember that Buy-Gold.Link is not responsible if the result is not to your satisfaction.

So if you’re really brave enough to try to remove the red spots from your gold coin(s) by yourself, here is the method for doing so. Place the spotted gold coin in a shallow saucer with the spotted side up and pour concentrated nitric acid onto it until the acid fully submerges the coin. Of course you have to be very careful when doing that so as to avoid any physical contact with the acid. The red spots will usually disappear within 2 hours but the coin won’t be damaged if you leave it in the acid longer than that, even if for a whole day.

It goes without saying that this method should only be used on gold bullion coins (90% purity or higher) and not on collectors coins with a lower gold content. The acid resolves the copper-rich area in the coin, so if you use it on collectors coins with a lower gold and higher copper content then you may not have much of a coin left after the treatment. 😉

Even on high gold purity bullion coins with larger red spots, this method could theoretically leave a small depression in the place where the red spots had been. So consider it carefully if you want to give this method a try to remove red spots on gold coins or leave it up to the experts such as the NCS.