Have you ever wondered what the rarest gold coin is? With that I mean a gold coin that was actually in circulation and not just a pattern coin. For pattern coins it is after all not unusual that only a few specimens exist. However, the gold coin that I want to introduce today must have been minted in the thousands but only 3 specimens are known to exist today. I will even tell you where you can (possibly) acquire a fourth one but for that you have to keep on reading until the end of this short article.

Is the English Double Florin the world’s rarest gold coin?

The (possibly) rarest gold coin is a 6.99829 gram English gold coin that was in circulation for only a few months in 1344. It is now known as the Double Florin or Double Leopard. The obverse side of this rarest gold coin shows the then English King Edward III on the throne underneath a canopy and with two leopards’ heads at the sides. Back then, the leopard was a common heraldic symbol on the English coat of arms. The letters EDWR D GRA REX ANGL ? FRANC DNS HIB that appear around the coin’s edge signify “Edward, by the Grace of God King of England and France, Lord of Ireland”. 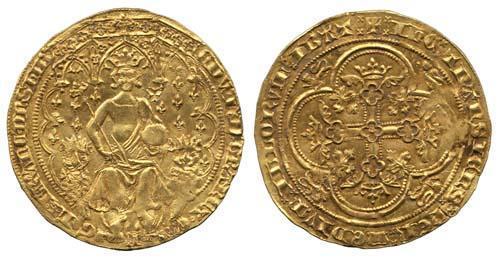 Why not visit the British Museum in London to see two surviving specimens of the Double Florin, the probably rarest gold coin, with your own eyes?

On the reverse side of the rarest gold coin, you will see a Royal cross within a quatrefoil at the center. A small leopard appears in each spandrel of the quatrefoil and the inscription along the coin’s edge reads IHC TRANSIENS PER MEDIUM ILLORUM IBAT (“But Jesus passing through their midst went his way”, from Luke 4:30). The 6.99829 gram Double Florin coin was meant to compete with the 3.5 gram Continental Florin coin but it was rejected by merchants. After only a few months, the coins were withdrawn from circulation and melted down.

Only three coins are known to have survived. They were all found in the Tyne river, two of them in 1857 and the third one in January 2006. Whoever lost them on a passage across the river in 1344 may very well have carried more of them, perhaps even an entire bagful. So if you live near the river Tyne and have nothing to do on the weekends, perhaps you could suit up in your scuba gear and take a metal detector along. You never know what you might find, perhaps even a fourth specimen of the probably rarest gold coin in the world. 😉