One thing that coin buyers take for granted these days is that one year’s issue of a coin differs from another year’s issue only by the year of mintage. That was not always the case in the past. In fact, many historic US gold coins have special rare versions that differ from the standard version in a variety of ways. This article will introduce three special rare US gold coins with unique design features that were issued in the mid-1800’s.

The first special version I want to mention is the 1850 $5 Moffat gold coin which is an altered version of the $5 Liberty Gold Half Eagle. The US Mint‘s Liberty Half Eagles depict Lady Liberty in profile on the obverse side and an eagle with outstretched wings that is holding a shield on the reverse. The word Liberty appears on the crown that Lady Liberty is wearing and “United States of America” is written around the coin edge above the eagle image on the reverse. 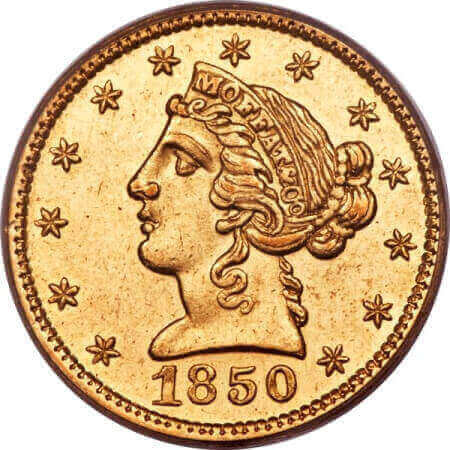 The 1850 $5 Moffat gold coin distinguishes itself from that standard version of the Liberty Half Eagles in two ways. On the obverse side, the word Liberty on Lady Liberty’s crown is replaced with “Moffat & Co”. The company Moffat & Co. was a private gold mint during the time of the California Gold Rush. Secondly, the inscription “United States of America” on the reverse is replaced with “S.M.V. California Gold”.

Another special gold coin whose creation was influenced by the California Gold Rush is the 1848 CAL issue of the $2.5 Liberty Gold Quarter Eagles. This special coin issue was minted in Philadelphia in 1848 from gold that was shipped there from California’s gold fields. A total of 1,389 Liberty Quarter Eagles were minted from that gold, all with the letters CAL. stamped above the eagle’s head on the reverse as a distinguishing characteristic. That makes these coins unofficially the first commemorative coins that were ever issued by the United States Mint. 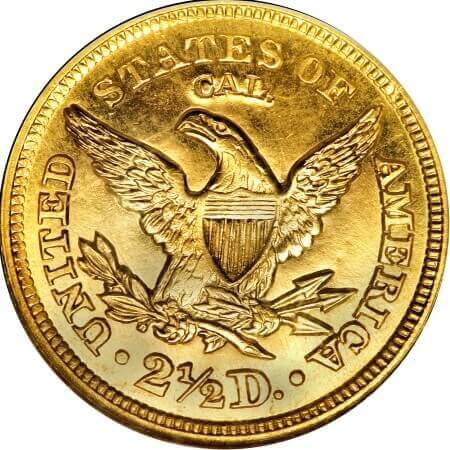 Historical evidence exists that proves that the modification of these Quarter Eagles was fully intentional to mark the first utilization of gold that came exclusively from the California Gold Rush in official US coinage. As far as the method of stamping the coins is concerned, it seems that each coin was stamped manually while still in the die. If it had been stamped outside the die, there would have been some minor but noticeable deformation on the obverse side but no such deformation was found on any of the CAL coins. The option of modifying the die itself by including the CAL. modification in it was not viable due to time constraints. The manual stamping of each coin proved so time-consuming that the project was only finished after the original deadline. 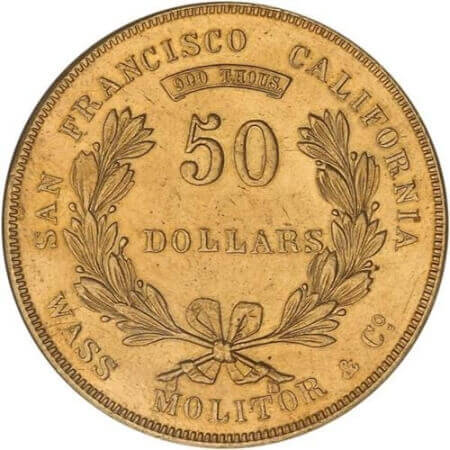 ultra-rare US gold coins like the privately minted $50 coins that were issued by Wass, Molitor & Co. are nearly impossible to find these days

Another one of the rare US gold coins that were issued during the time of the California Gold Rush is the $50 piece that was minted by the private minter Wass, Molitor & Co. in San Francisco in 1855. Its obverse design resembles the various Liberty Eagle coins in that it shows a leftward-facing bust of Lady Liberty that is surrounded by 13 stars. The reverse design shows a wreath that is tied with a bow and resembles the Liberty Gold Dollar and Indian Gold Dollar coins in that respect. The 50 Dollar denomination is inscribed in the center of the reverse and the words SAN FRANCISCO CALIFORNIA and WASS MOLITOR & Co. appear along the edge.