Rare gold coins don’t have a special section on the Buy-Gold.Link website yet. For now, the site focuses on introducing the most common gold bullion coins. If you’re American, you probably heard of American Gold Eagles many times before. American Gold Buffaloes are still much less known however, even though they are made out of purer gold (99.99 %) than the more famous Gold Eagles (91.67 %).

In the same way, Austrian Gold Philharmonics are fairly well-known among European gold buyers whereas British Lunar Gold coins (perhaps due to their short history) are still relatively obscure.

The first one is the 20 Mark gold coin that shows a young King Otto of Bavaria on the coin’s obverse side. His full name was Otto Wilhelm Luitpold Adalbert Waldemar von Wittelsbach. Even though he was the official King of Bavaria between 1886 and 1913, he never actually reigned. That was due to King Otto’s mental illness. The affairs of state were handled first by his uncle and later by his cousin who served as regents. 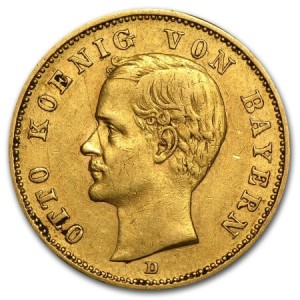 obverse side of the 20 Mark King Otto rare gold coins

The coins were minted in Munich by the Bavarian State Mint that still exists today. Of course, the mint nowadays produces coins for Germany as a whole and not only Bavaria. The mint mark D that is clearly visible underneath King Otto’s image on the obverse is also still in use today. The German words “OTTO KOENIG VON BAYERN” (Otto King of Bavaria) encircle the king’s profile on the obverse and the edge of the coin is engraved with the phrase “GOTT MIT UNS” (God with us). The reverse shows a heraldic eagle with spread wings and a crown hovering above. The year of mintage, denomination (20 Mark) and the German words “DEUTSCHES REICH” (German Empire) encircle the eagle. 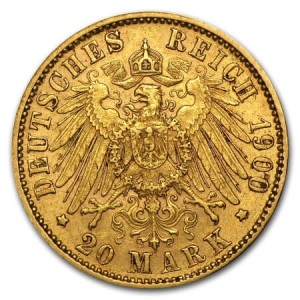 reverse side of the 20 Mark King Otto rare gold coins

The King Otto 20 Mark gold coins are quite hard to find these days. As rarity always adds value, they are nowadays worth a premium of about 150 Dollars above the melt value {(current spot price of gold x 0.2304 oz) + 150 Dollars}.

By the way, the 20 Mark coin has an even rarer ‘little brother’, the King Otto 10 Mark gold coin. Despite its lower denomination and gold content (0.115 oz), it is not that much smaller in diameter (19.5 mm) but considerably thinner (0.9 mm). The design of both sides of the 10 Mark coin is otherwise identical to the 20 Mark coin.

This is the first post in a series. From now on, Buy-Gold.Link will periodically introduce contemporary as well as historic gold coins that are not featured on the site yet. In the future, these coins might be added to two new sections on the site, ‘uncommon gold bullion coins’ and ‘obscure historic gold coins’ or something like that. Maybe you have a better suggestion? Then please comment below. Constructive ideas are greatly appreciated.