I’m sure I’m not the only one who thought that the Royal Mint‘s series of Queen’s Beast gold coins and Queen’s Beast silver coins had ended in September 2020 with the White Greyhound of Richmond issue. Even though all ten heraldic beasts had already individually appeared on the reverse of a coin issue by then, why not end the series with a coin that depicts all the beasts on a coin together? That’s exactly what the Royal Mint did with its 2021 Queen’s Beasts Completer Coin which is sometimes also referred to as the Queen’s Beasts Collector Coin.

The reverse side of this surprise issue of gold and silver coins shows all ten beasts forming a protective circle around the effigy of Queen Elizabeth II. The obverse side of the 2021 Queen’s Beasts Completer Coin shows the portrait of Her Majesty as well just like all ten prior issues of the Queen’s Beast coins. As the name already implies, the gold and silver coins are mainly targeted at collectors which is highlighted by the fact that the coins are mainly issued as limited-mintage proof coins in more sizes than ever before. There exists however also a bullion version of the coins but only in gold and only in the size of 1 oz. 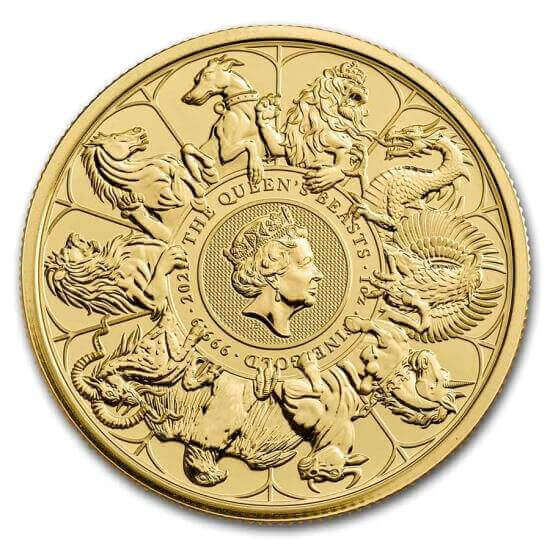 reverse side of the 2021 Queen’s Beasts Completer Coin

Previously, a proof version of the Queen’s Beasts gold coins existed in the four different sizes of 1/4 oz, 1 oz, 5 oz and 1 kg. A limited-mintage proof version of the Completer Coin of the Queen’s Beasts gold coins was however issued in the sizes of 1 oz, 5 oz, 10 oz, 1 kg, 2 kg and 10 kg. The three sizes of 10 oz, 2 kg and 10 kg have thus been issued for the first time in this coin series. The single 10 kg gold proof coin that was produced even set a new record in the Royal Mint’s history. Never before had the mint produced a gold coin of this size before. Producing this huge coin took 400 hours, including four days just for polishing alone.

If you’re now eager to obtain a 2021 Queen’s Beasts Completer Coin of any size for your own collection now, I’m sorry that I have to disappoint you. The coins sold like hot cakes as soon as they were first issued this April. Therefore, your best chance for obtaining one and thus completing your Queen’s Beasts coin collection will be on the secondary market where some of these collectible coins are certain to become available, albeit for vastly inflated prices.