In recent years, many mints have upgraded their production standards to produce bullion coins of higher and higher purity. Whereas numismatic coins are still commonly produced out of 90% gold or silver, bullion coins are held to a much higher standard. So what are currently the world’s purest bullion coins out of the four precious metals gold, silver, platinum and palladium?

Until 2012, Britain’s Royal Mint still sold 95.8% pure British Silver Britannia coins. Since then, the coins are 99.9% pure which is the minimum purity standard for silver bullion coins now. Many government mints raised the purity of their silver bullion coins in recent years to 99.99% though. The silver coins that can match this purity are the Canadian Silver Maple Leafs, Australian Silver Kangaroos, Australian Silver Lunar coins, Queen’s Beasts silver coins and the limited-mintage Canadian “Call of the Wild” silver coins.

The standard purity for the few kinds of platinum bullion coins that are still produced regularly is also 99.95%. That is the case for the American Platinum Eagles, Canadian Platinum Maple Leafs, Austrian Platinum Philharmonics and the just recently introduced Queen’s Beasts Platinum Coins. The purest platinum bullion coins are minted by the South African Mint though. Mintage of the 99.99% pure 2017 Platinum Krugerrands is limited to 1,967 pieces in order to commemorate the 50th anniversary of the Krugerrand gold coins that were first issued in 1967.

The choice for palladium coins is even more limited than for platinum coins. Basically, you will only come across two types of palladium bullion coins. The 99.9% fine Chinese Palladium Pandas were last produced in 2005 so it is unlikely that you will still find them listed for sale online. That leaves the 99.95% fine Canadian Palladium Maple Leafs as the purest bullion coins out of that metal. They were last produced in 2015. Considering the recent rise in the spot price of palladium however, it wouldn’t surprise me to see the Royal Canadian Mint issue Maple Leaf coins out of palladium once again in the near future.

Finally, let’s have a look at gold coins. Most contemporary gold bullion coins are 99.99% pure. However, some of the most famous and best-selling gold coins are only 91.67% pure like the American Gold Eagles and the South African Gold Krugerrands. Perhaps some of you are wondering why gold coins of lesser purity outsell others that are much purer. The reason is that gold, as a soft metal, is very susceptible to being scratched. The 99.99% pure Canadian Gold Maple Leafs for example have a reputation for being very easily scratched. Even just gently stacking Gold Maple Leaf coins on top of each other (like you would when placing them inside a safe) risks scratching their vulnerable surfaces. For this reason, many gold buyers prefer 22 karat (91.67% purity) gold coins which are alloyed with copper. This alloying makes the coins harder (and therefore more difficult to scratch) and also gives them a slight reddish hue.

The purest bullion coins out of gold have a purity of 99.999%. The first and only government mint that produces gold bullion coins of that outstanding purity is the Royal Canadian Mint. All the gold coins in the “Call of the Wild” series are 99.999% pure. Some special issues of the Canadian Gold Maple Leafs were also minted to that level of purity. That includes the limited number of 100 kg Maple Leaf gold coins that were issued in 2007.

In addition to those coins mentioned above, the Royal Canadian Mint also issued a provincial flowers gold coin series from 1998 to 2011. The 14 proof coins that make up this series are all minted out of 99.999% pure gold. The first such coin that was issued in 1998 depicts the flowers of Canada’s 4 founding nations (the Rose for England, the Lily for France, the Thistle for Scotland, the Shamrock for Ireland) on the reverse and a portrait of Queen Elizabeth II on the obverse. The second coin in this series that was issued the following year depicts the Lady’s Slipper orchid. 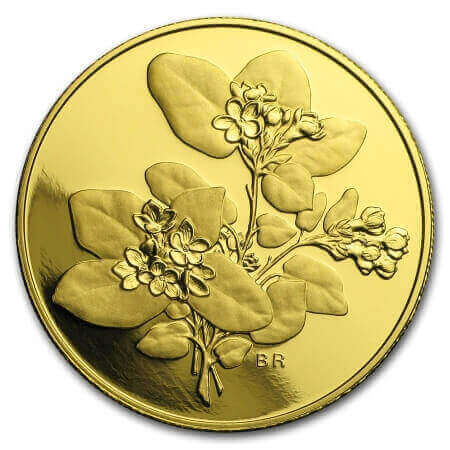