Collecting coins that have an annually changing design is getting more and more popular with collectors worldwide. The Australian Gold Kangaroo coins as well as the Chinese Gold Pandas have been especially popular in this regard. However, it is not only gold coins that can be attractive for coin collectors because of their changing design. The proof version of the 99.95% pure 1 oz American Platinum Eagles for example also has a different design each year.

Changing the design of the proof coins each year while keeping the brilliant uncirculated version unchanged is a strategy that the British Royal Mint has also employed successfully in recent years with its British Gold Britannia and Silver Britannia coins. The US Mint takes this strategy to another level with its proof Platinum Eagles though. Not only do the proof coins change their design every year but a certain number of consecutive annual issues always form a thematic series. The current 3-coin series is dedicated to and inspired by the Preamble to the American Declaration of Independence.

Starting in 2018 and ending this year in 2020, the obverse design of the proof American Platinum Eagles during these 3 years was always inspired by one of the three tenets – Life, Liberty and Happiness – mentioned in the Preamble to the Declaration of Independence. Whereas the obverse sides of the 2018 and 2019 proof Platinum Eagles were respectively dedicated to “Life” and “Liberty”, the latest and final 2020 edition of this series celebrates “Happiness”. 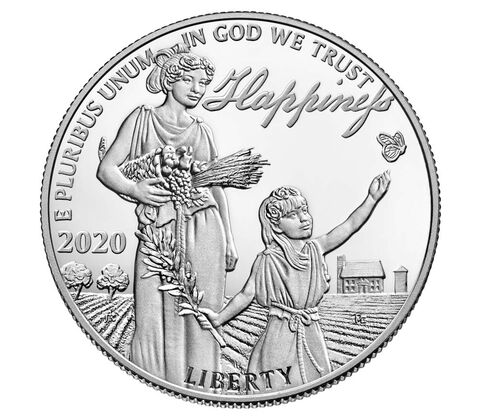 obverse side of the 2020 1 oz proof American Platinum Eagles

This concept is portrayed through a mother and child walking on an agrarian field at harvest time. Whereas the mother is carrying a cornucopia of harvested produce, the child is happily chasing a butterfly nearby. A facsimile of the word “Happiness” is inscribed on the obverse side as well in the original letterform (that is no longer commonly used today) from the Declaration of Independence with the long “s”. The reverse side of the 2020 proof Platinum Eagles depicts the same image of an eagle in flight with an olive branch in its talons that was first introduced to the coins back in 2018.

The 2020 proof American Platinum Eagles can already be ordered from the US Mint Shop now. Whereas 20.000 proof Platinum Eagles were minted in 2018, mintage dropped to 15.000 pieces in 2019 and this year it has dropped even further to only 13.000 coins. So order yours while supplies still last! As I’m writing this now, there are also a limited number of 2018 and 2019 proof coins still available. The price is identical for all three coins, currently 1.545 USD, and the coins come nicely packaged in a black velvet satin-lined presentation case.