One of the issues that might confuse a new precious metal investor is the difference between privy marks and mint marks. In fact, there are quite a few similarities between the two. The current trend sees more and more mints issue coins with special privy marks (to appeal to collectors) whereas mint marks seem to be going out of fashion. So what exactly is the difference between the two?

Mint marks are usually small letters that can appear on either side of a coin. However, mint marks can also be something else, for example a symbol or an inscription. The traditional mint mark of the Mexican Mint for example is a monogram that is composed of the capital letter M with a small o placed on top where the M creates the V space.

Another type of mint mark are symbols. The Royal Spanish Mint for example used the star symbol as a mint mark in the past. In this system, the number of points of the engraved star mint mark would indicate the specific manufacturing mint. The Madrid branch of the Spanish Mint used six-pointed stars, the Barcelona branch eight-pointed stars etc. After 1868, small dates were placed inside these stars to indicate the year the coin was minted. The Royal Dutch Mint in Utrecht also uses a symbol to mark most of its coins. The caduceus symbol (a winged staff with two snakes coiled around it) has been used by the mint since 1567 and is the official mint mark of the Royal Dutch Mint since 1816.

An inscription as a mint mark is often found on coins from Islamic countries. That inscription is usually the Arabic name of the city where the coin was minted.

The purpose of mint marks

The original purpose of a mint mark is to identify the specific mint where the coin was produced. This was important if some coins were for example underweight or overweight. By identifying where a deficient coin had been produced, the underlying problem could be fixed. One common problem in history was that dishonest mint officials would intentionally debase the value of the coins they produced by making them smaller, thinner or by reducing the amount of precious metal in them. This kind of tampering was and is a very serious crime. In some cases like in ancient Rome, the government that issued the silver and gold coinage reduced their precious metal amount over time which debased the value of their currency.

The US Mint also once had a branch mint overseas. The Manila branch of the US Mint in the Philippines produced coins from 1920 to 1922 and again from 1925 to 1941. The coins that were produced there since 1925 were stamped with the mint mark M.

What are privy marks?

In recent years, we have seen more and more mints issue coins with special privy marks. Originally, a privy mark wasn’t much different from a mint mark. A privy mark was a small mark that was placed on a coin for the purpose of identifying the mint, issuer or as an anti-counterfeiting measure.

Nowadays, a privy mark is often used as a special design and marketing feature. Mints place such special privy marks on a coin to commemorate a certain event (for example the anniversary of a coin series) or to distinguish the coins of a special coin set from ‘standard’ coins. Therefore, privy marks are generally used in addition to mint marks as a feature to enhance the uniqueness of a certain coin issue.

The Royal Canadian Mint is known for issuing privy-marked coins quite often. Various unique privy marks have appeared on the mint’s coins in recent years such as a panda bear, four-leaf-clover, Bigfoot and even a Mark V tank. On these coins, the privy mark is used as a special design feature. There exists even a special series of privy-marked 1 oz Silver Maple Leaf coins that celebrate the Chinese Lunar Calendar. The annually changing privy mark on these coins always shows the Chinese zodiac animal for that specific year of issue. The 2018 coins are hence dedicated to the “Year of the Dog” and Apmex still has some of these coins for sale here. 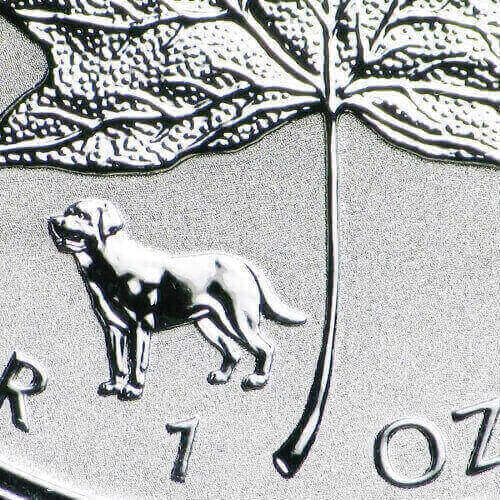 Whereas the Royal Canadian Mint’s bullion coins don’t have any mint marks, special coins with privy marks are regularly issued just like on this Canadian Silver Maple Leaf that bears a “Year of the Dog” privy mark

Another good example for a unique privy mark that commemorates a special event is this Canadian Silver Maple Leaf coin that bears a light bulb as a privy mark. In order to commemorate Canada’s contribution to the invention of the electric light bulb, the small and unique light bulb privy mark has been placed underneath the textured maple leaf design. By limiting the mintage of this coin to 50,000 pieces, the Royal Canadian Mint ensures that the coin will sell at a premium compared to regular Canadian Silver Maple Leaf bullion coins.

That is a common sales tactic employed by the manufacturing mints. By reducing the mintage numbers of all privy-marked coins (compared to regular bullion coins which are usually produced according to the current market demand), the mint makes these coins more appealing to collectors that will generally be willing to pay a premium for them.

Privy marks can also be used as an anti-counterfeiting measure. The Royal Canadian Mint introduced such a measure a few years ago as a part of its Canadian Maple Leaf coin series. On all newly-issued 1 oz Canadian Maple Leaf coins out of gold, silver, platinum and palladium, you will now find such an anti-counterfeiting privy mark/security mark on the reverse. Despite its small size, it is shaped like a textured maple leaf and has the last two digits of the year of mintage laser-engraved in its center.

Considering the popularity of privy-marked coins in recent years, I think it’s safe to say that we will see more and more mints issue such coins in the years to come.