Even though bullion coins are generally intended to be purchased by investors, many mints are actively looking for ways to market special versions of their coins to collectors. The production of modified bullion coins (such as coloured coins) as well as privy-marked coins are two such methods that are becoming more and more commonplace whereas the production of proof coins can be seen as the traditional method of achieving that objective. The most recent successful example for this trend are the privy-marked American Eagle coins that were just recently issued by the US Mint to commemorate the 75th anniversary of the end of World War II.

A limited-edition privy-marked proof version of both the popular American Gold Eagles as well as the American Silver Eagles went on sale at the official US Mint website at noon ET on November 5th. Whereas other government mints regularly issue privy-marked versions of their bullion coins, the US Mint had never issued privy-marked American Eagle coins before.

Initial demand for these new coins that only distinguish themselves from the regular proof versions by their unique privy mark was so huge that the mint’s website couldn’t cope with the traffic. Nevertheless, the gold version of these privy-marked American Eagle coins with a limited mintage of just 1,945 units almost completely sold out within minutes and already became unavailable by 12:07 p.m. Almost all of the 75,000 units of the silver version of the coins sold out within roughly 90 minutes as well. 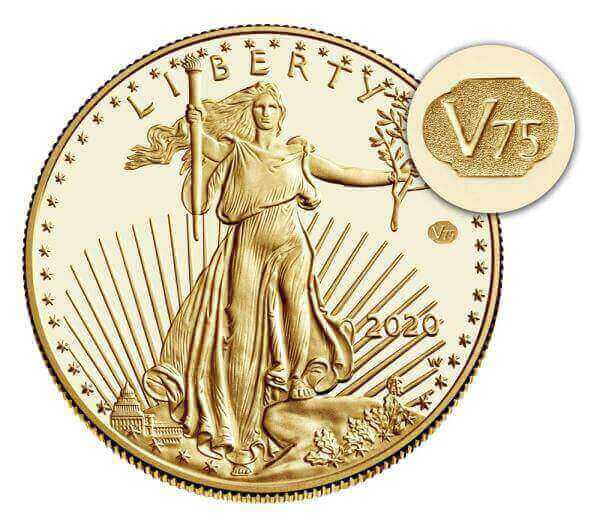 The unique and symbolic “V75” privy mark of these coins that celebrate the 75th anniversary of the end of World War II was reportedly (according to the US Mint) inspired by the aerial view shape of the Rainbow Pool located at West Potomac Park in Washington D.C. which is an integral part of the World War II Memorial there. The “V75” privy mark appears within the incused (sunk into the surface) outline of the pool in the upper right field on the obverse side of both the gold and silver version of the coins. Both issues of these special commemorative coins bear the W mint mark since they were struck at the West Point branch of the US Mint.

Even though the “75th Anniversary of the end of World War II” privy-marked American Eagle coins are currently sold out, there is still a small chance for eager collectors that absolutely want to add them to their collection. Possibly to prevent a number of total orders for each coin that exceeded the respective mintage limit, the ordering process was stopped well short before reaching these limits. In addition to this buffer, one can expect that some orders will be cancelled and that some ordered coins will be returned.

By clicking on the ‘REMIND ME’ button on the respective product page of the WWII Gold Eagle and/or WWII Silver Eagle, potential buyers can leave their email address or cell number that will then be used by the mint to alert them when some coins become available for purchase again. Lucky successful buyers will receive their ordered coins alongside a corresponding certificate of authenticity inside a special end of World War II package sleeve.