Government mints are certainly best known for the coins that they produce. However, some mints like the Royal Canadian Mint also produce bullion bars. Other product types that some mints produce are precious metal rounds and medallions. So what is the difference between a coin, a round and a medallion?

Coins can only be minted by government mints and they are legal tender in the country that produces them. In addition to the precious metal weight and purity, a coin will have an official face value engraved on it. An exception to this rule are the South African Krugerrand gold coins. They have the status of legal tender in South Africa and they are minted by the South African Mint, the official government mint of South Africa. However, they do not have an official face value. If you were actually to use them in South Africa to pay for something, their value would be calculated based on the current gold spot price. So, a South African shop owner would let you buy goods for about 1305$ (today’s gold spot price) if you paid then and there with a 1 oz Gold Krugerrand coin.

Rounds look like coins except that they do not have a face value engraved on them. The precious metal weight and purity is also engraved on precious metal rounds just like on coins. Furthermore, rounds are generally minted by private mints that do not have the authority to mint official coins. There are few gold rounds on the market but a large number of silver rounds. Many private mints for example mint 1 oz American Silver Buffalo Rounds. “1 troy ounce .999 fine silver” or something similar would be engraved on such a silver round.

The design of the Silver Buffalo rounds is inspired by James Earle Fraser’s design for the 1913 Buffalo Nickel (a.k.a. Indian Head Nickel). That design was also used for the popular American Gold Buffalo coins. The advantage of buying such a silver round instead of a silver coin of the same size is simply the price. For a 1 oz Silver Buffalo Round you will pay less than 2$ as an added premium on top of the silver spot price. That is about half the premium you would have to pay for a 1 oz silver coin (of the same purity) like the American Silver Eagle. For somebody that is investing in precious metals (especially silver) on a larger scale, saving 2$ per 1 oz is substantial. 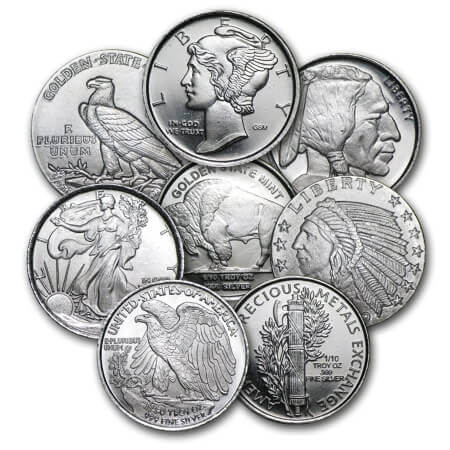 One major reason for this substantial difference in premiums is that rounds are sold in a more direct manner to the public. In many cases, investors can order precious metal rounds directly from the private mint that manufactures them. The Golden State Mint is a good example for such a private mint that sells directly to the public through its website. The premium would be the lowest in this case. Most precious metal dealers, no matter whether they operate exclusively online or maintain retail shops as well, order a certain amount of precious metal rounds directly from the mint as well. The premium you would have to pay in this case would be a little bit higher since the dealer premium would be added on top of the mint’s premium.

In addition to coins and rounds, there are also medallions (sometimes also called medals) made out of precious metals. Precious metal medallions are issued by government mints to commemorate certain events in an official way. An example for this are the gold and silver medallions that the Singapore Mint issued to commemorate the historic meeting between the US president Donald Trump and the North Korean leader Kim Jong Un.

Medallions are not legal tender and don’t have a face value (so they are not the same as coins). Precious metal medallions sometimes don’t even have their precious metal purity and weight engraved on them. That would make it nearly impossible to sell such a medallion on the secondary market so medallions are not suitable for investment. Medallions mostly appeal to collectors (of items relating to a certain field that the medallion commemorates) as well as to numismatists to a lesser degree (since some medallions replicate the design of coins, but without the face value of course).

The design of a coin can also be replicated on a precious metal round. If the product mainly serves to commemorate the existence of a certain coin (for example the 50th anniversary of the coin’s inauguration) and has a numismatic value due to its limited mintage, it would be considered as a medallion. If the product just uses the design of the coin but is produced in large quantities (so it has no numismatic value due to its abundance) and sold for its bullion content (and not as a commemorative item) just a little above the precious metal spot price, it would be considered as a precious metal round. Medallions and rounds that replicate the design of certain coins are generally of a different weight and dimensions as the original coins.

Theoretically, a private mint could issue a medallion as well. However, such a privately issued medallion would then not be considered “official” by many collectors and would therefore probably sell very poorly. Some smaller countries that don’t have a well-established government mint may have their official medallions minted by foreign private mints like the Sunshine Mint though. That is done as a cost-saving measure since the government mints of for example poorer African countries often don’t have the technical equipment and expertise to produce precious metal medallions of high quality.

Some smaller countries don’t even possess their own official government mint so all their coinage and medallions are produced by foreign government mints or private mints. According to Wikipedia, the Royal Canadian Mint for example produced approximately 52 billion coins for 62 different countries between 1980 and 2005.