Most collectors of precious metal coins are constantly looking for ways to expand their collection. Buying coins from the less well-known government mints of smaller countries is one way to do that. However, some smaller countries have their commemorative precious metal coins minted by the big players in this market like the Royal Canadian Mint and the mints of other small countries simply can’t compete in terms of quality. The Mint of Poland is one of the smaller mints in Europe that produces stunning and highly original commemorative precious metal coins. This article means to introduce some of these Polish gold coins that collectors might consider adding to their collection.

One special coin series of commemorative gold and silver coins that was produced by the Mint of Poland and issued in 2008 is the “Saints of Orthodox” series. Whereas the gold coins of this series are 90% pure, the silver coins were minted out of Sterling silver (92.5% purity). As the name already implies, each of these coins shows the image of a saint of the Orthodox church on its reverse side. What makes the design of these coins unique is that the image of the saint is always surrounded by four red and green zircon crystals. The “Saints of Orthodox” coins were actually produced for the National Bank of the Republic of Belarus and their face value is therefore denominated in Belarusian Roubles (BYR). 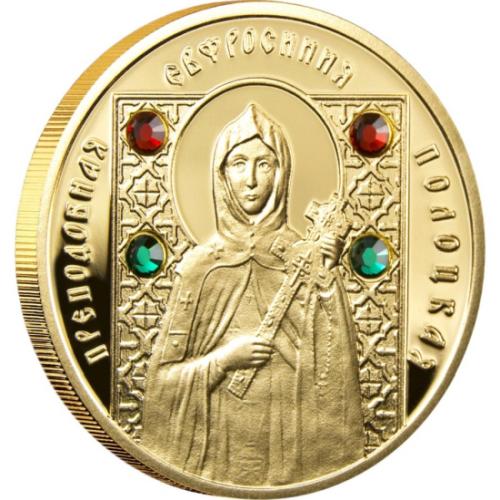 The reverse sides of the Polish gold coins that depict Orthodox Saints have red and green zircon crystals fitted into their surface!

Another somewhat strange series of Polish gold coins is the “Imperial Faberge Eggs” Series. As you can probably already guess, these gold coins are shaped like an egg. Just like with the “Saints of Orthodox” coins, the Mint of Poland produced these coins for another nation, this time the Pacific Island Nation of Niue. Each of these proof coins has a face value of 100 NZD. Strangely, the stylized images of the various Fabergé Eggs that once belonged to the Russian Tsars are depicted underneath a bust of the British Queen Elizabeth II on the obverse side of the coins.

Unusual coin shapes seem to be a kind of specialty of the Mint of Poland as is the application of gemstones to the surface of the coins. An example of the former is the Christmas Star gold coin (1/2 oz, 90% pure gold) that the mint produced for Niue back in 2010. It shows a lovely image of angelic-looking children opening their Christmas presents underneath the ornamented Christmas tree on the reverse side. Large amber gemstones that are inlaid into the surface of the “Amber Route Series” gold coins exemplify the latter. Strangely, these last coins include Polish-language inscriptions even though they were minted for Niue and denominated in NZD as well.

If you now think that all Polish gold coins were in fact minted for issue by other nations, you’d be wrong. The most recently issued Polish gold and silver proof coins are dedicated to the centenary anniversary of the birth of Saint John Paul II who was the first-ever Polish Pope between 1978 and 2005. The relatively large 99.99% pure gold coin (62.2 gram, 40 x 40 mm, maximum mintage of 966 pieces) that is now dedicated to commemorate the life of this beloved Polish Pope is also a bit unusual regarding its design.

Its reverse shows Saint John Paul II praying in the Basilica of the Presentation of the Blessed Virgin Mary in Wadowice whereas a fragment of Jerzy Kossak’s painting depicting scenes of the 1920 “Miracle on the Vistula” battle appears on the obverse. Both designs are fitted within a circle on both sides even though the coin is square in shape. Only the 500 Polish zloty denomination, the year of mintage 2020, the mint mark of the Mint of Poland and a decorative pattern are fitted into the corners of the coin.

In addition to the gold coin, there exist also two different 32 mm silver proof coins (one out of 92.5% pure Sterling silver, the other out of 99.9% pure silver) that are dedicated to the centenary anniversary of the birth of Saint John Paul II as well. Each of these coins has a different design.

If some of you that are reading this are now interested to buy some of these coins, you can check at several shops online. The online shop of the Mint of Poland is unfortunately not available in English yet. However, I managed to find the square Saint John Paul II gold coin in it and you can order it by following this link. The other coins that are mentioned in this article are probably also all available at this shop. However, it’s not easy to find them if you don’t speak Polish. If you can’t find a Polish-speaking friend to help you with this task, the American gold dealer First Coin Company, Inc. also has a selection of Polish gold coins for sale on its website.