Every coin collector dreams of adding some especially rare versions of gold and silver coins to his collection. For this purpose, some collectors turn to bimetallic coins that have a gold core and a silver outer ring. Others collect colored precious metal coins, hologram coins or even coins that are beset with jewels. One rare coin version that is not so well known are piedforts. Unfortunately, few mints issue piedfort coins these days but that is also an advantage in a sense. First of all, it makes those few piedforts that are issued from time to time really special. Second, it allows dedicated collectors that were to begin collecting piedforts now to possibly accumulate a complete collection (for example: all piedforts out of precious metals that were issued by major mints since the year 2000).

So what exactly are piedfort coins? The French word piedfort literally means “heavy foot” and is used for coins that are unusually thick. Piedfort coins are often exactly twice as thick as regular coins. They were mostly minted as pattern coins in the past in order to test out new designs. Their unusual thickness made it easy to distinguish them from regular coins. It also prevented these rare pattern coins to inadvertently get lost among regular coins. When piedfort coins are minted nowadays however, they are usually targeted towards collectors instead of simply serving as pattern coins. After all, it would be a kind of waste of rare precious metals to produce a coin of double the thickness just for testing purposes. Pattern coins these days usually look exactly the same as regular coins except for their earlier date of mintage. 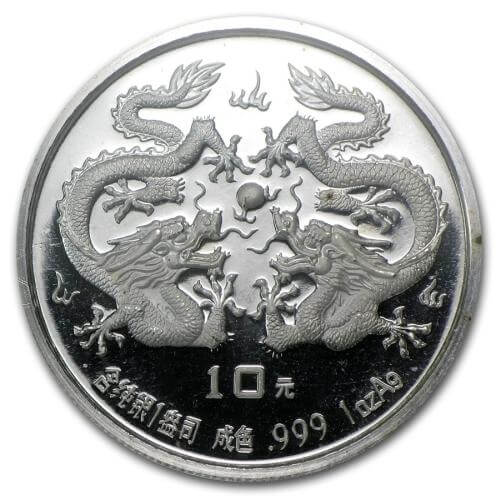 One of the few mints that has issued precious metal piedfort coins is the Chinese Mint. In 1988, it issued 20,000 proof piedfort coins out of 99.9% pure silver. With a thickness of 2.98 mm and diameter of 40 mm, these rare 1 oz silver coins are actually of the same size as the 30 gram Chinese Silver Pandas (which are not declared as piedfort coins). Gorgeous twin dragons that seem to be playing with a ball are depicted on the reverse side of the large coins and one of the famous buildings of Beijing’s Temple of Heaven appears on the obverse. The coins were issued to commemorate the Lunar Year of the Dragon and sometimes with a little bit of luck you can still find them listed for sale online. The popular dealer Apmex however doesn’t have them in stock right now.

The second government mint that has issued piedfort coins out of precious metals before is Britain’s Royal Mint. Most of its issued piedfort coins were minted out of silver. The most recent of them was just unveiled in October 2018. It is a silver proof piedfort coin with a £5 face value that was issued to commemorate the 70th birthday of the Prince of Wales. The large coin (38.61 mm diameter) that shows Prince Charles in profile was struck out of 92.5% pure sterling silver. The price of £155 for the silver piedfort proof version is hefty but that doesn’t seem to deter collectors since about 70% of the only 1,000 coins that will be minted are already reserved. If you like, you can order this coin directly from the Royal Mint while supplies still last.

Apart from the piedfort silver coins, the Royal Mint also issues its popular Gold Sovereign coin in a piedfort proof edition. While the 2017 piedfort proof Gold Sovereign sold out within 24 hours, the 2018 edition is still available as of now. The issue limit is 2,675 pieces and this level of rarity is of course reflected in the price of £815! For that heart-attack-inducing price, you would however get a coin that is twice as thick as a regular BU or proof Sovereign coin. Furthermore, the 2018 piedfort proof Gold Sovereign features a special mint mark in the form of a crown on its reverse side next to the year of mintage. This mint mark was chosen as a commemorative symbol for the Sapphire Jubilee of Queen Elizabeth II that took place on the 6th of February 2017.