Many coin collectors these days would be surprised if they obtained a coin that shows the image of a shield with the US stars and stripes (a symbol that has appeared on lots of different US coinage) as well as a reference to the country of the Philippines. Nowadays a lesser-known part of US history is the fact that the Philippines once were an American colony. Among the coinage that was minted during this period were Philippine Silver Pesos (as well as the corresponding fractional coins) that included references to both the United States and the Philippines in their design and lettering.

Although the Philippine Silver Pesos were minted from 1903 until 1935, it was only during the first few years (1903 – 1906) that the coins were minted out of 90% pure silver. The minting was done by the Philadelphia and San Francisco branches of the US Mint and the coins that were minted at San Francisco bear the S mint mark. In 1907, the silver purity of the coins was reduced (to 75% or 80%) so only the Philippine Silver Pesos and fractional coins that were minted during the first 4 years of mintage met bullion quality standards. Along with the lower purity, the later-minted coins were also a bit lighter and smaller. 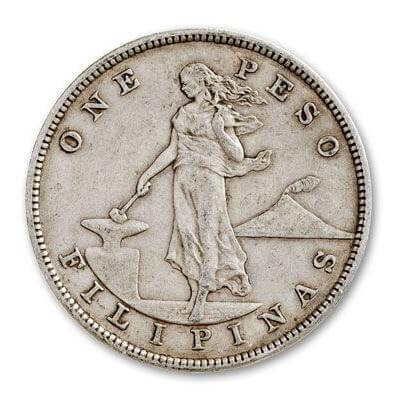 As far as the design of the Philippine Silver Pesos is concerned, it is identical for all its types, so the 1 Peso coin and its associated three fractional coin versions (50 Centavos, 20 Centavos and 10 Centavos). The obverse side of the coins shows an eagle with its wings outstretched above a shield that bears the stars and stripes of the American flag. The year of mintage and the words “United States of America” surround the central design. On the reverse side of the coins you will find the beautiful image of a standing lady with a flowing dress. The hammer she is holding in her right hand is resting upon an anvil and the outline of the volcano Mount Mayon appears behind her in the distance. The respective coin denomination and the word “Filipinas” surround the central reverse design.

The Philippine Silver Pesos and its fractional Silver Centavos were circulation coins. Mintage numbers reached the millions with the 1 Peso coins minted in much larger numbers than the fractional Centavo coins. However, a limited percentage of every coin denomination was also issued as proof coins. By the way, the Philippines not only issued (and still issue) silver coins but gold coins as well. If you’re interested, you might want to check out this earlier published article about Philippine gold coins.