If you are a numismatic collector of gold coins, you are probably always looking for ways to diversify your collection. One possibility to do so is to buy coins from a country that is not so well-known for producing gold coins. Quite some time ago, Buy-Gold.Link already published articles about Swiss gold coins and Finnish gold coins. Today’s article is about gold coins from a much more exotic country in Asia, the Philippines. The first Philippine gold coins were already produced back when the country was still a Spanish colony. These 87.5% pure gold coins that were produced in the late 19th century will however be nearly impossible to find these days.

During the reign of the Spanish Queen Isabella II, three denominations of gold coins (1 Peso, 2 Peso and 4 Peso) were issued between 1861 and 1868. All three of them bear a left-facing portrait of the Queen on their obverse side. Their reverse side displays the Spanish coat of arms and the Spanish inscription “REINA DE LAS ESPAÑAS” (Queen of Spain) but also acknowledges that the coins were minted in the Philippines by including the word “FILIPINAS”.

All three colonial Gold Peso coins were fairly small. The 1 Peso coin weighed just 1.6915 gram and measured 15 mm in diameter, the 2 Peso coin was double in weight (3.383 gram) but still only measured 18 mm in diameter and the 4 Peso coin weighed 6.7661 gram and was yet just a little bigger (21 mm diameter). The annual mintage numbers of all three coins were fairly high at first (between a minimum of 143,000 and a maximum of 507,000 coins per denomination per year) until 1864/65 but then declined sharply.

Between 1880 and 1885, colonial gold coins were issued once more in the Philippines but only in the denomination of 4 Pesos. These coins were of the same size and weight as the earlier 4 Peso gold coins but the portrait on their obverse side was that of the then Spanish King Alfonso XII.

The Philippines didn’t only issue gold coins during colonial times but continued to do so from the 1970’s until our current times. The first gold coin that was issued in 1970 was 91.67% pure and weighed 19.3 gram. It was a commemorative 1 Piso gold coin (mintage: 1,000) that was dedicated to the visit of Pope Paul VI. The two sides of this large and thin gold coin (diameter: 38.3 mm) depict busts of Pope Paul VI and the then President of the Philippines Ferdinand E. Marcos.

Commemorative Philippine gold coins in the 1970’s and 1980’s

Between 1975 and 1978, five more commemorative gold coins of 90% purity were issued. The 1,000 Piso gold coin that was issued in 1975 was dedicated to the 3rd Anniversary of the New Society. The small gold coin (weight: 9.95 gram) must have been quite popular since 23,000 brilliant uncirculated and 13,000 proof coins were issued that year. The coat of arms of the Philippines appears on the coin’s obverse side and a bust of Ferdinand E. Marcos can be seen on the reverse.

In 1976, a 1,500 Piso gold coin was issued that was dedicated to a meeting of the International Monetary Fund that took place in Manila that year. It was the heaviest (weight: 20.55 gram) but not the largest (diameter: 33 mm) gold coin that the Philippines had issued until then. A map of the Philippines appeared on the obverse side of these coins and a stylized star can be seen in the middle of four emblems on the reverse side. These are the emblems of the World Bank, International Monetary Fund, International Finance Corporation and International Development Association. Mintage of the 1976 coin was already far lower than the previous year with 5,500 brilliant uncirculated and 6,500 proof coins being minted.

The 1,500 Piso Philippine gold coins that were issued in 1977 and 1978 were of the same size and weight as the coin from 1976. The 1977 coin was dedicated to the 5th Anniversary of the New Society. It showed Ferdinand E. Marcos on the obverse side and the official logo of the central bank of the Philippines (Bangko Sentral NG Pilipinas) on the reverse. The coin was even less popular than its predecessor (perhaps a less elitist and more populistic design would have helped?) and only 4,000 brilliant uncirculated and 6,000 proof coins were issued.

In addition to the 1,500 Piso coin mentioned in the last paragraph, there was also a 5,000 Piso gold coin issued that same year and for the same reason. With a diameter of 50 mm and 68.74 gram in weight, it still is the largest and heaviest of all Philippine gold coins that were ever issued. The reverse side of this coin depicts the conjoined busts of Ferdinand E. Marcos and his wife Imelda Marcos. 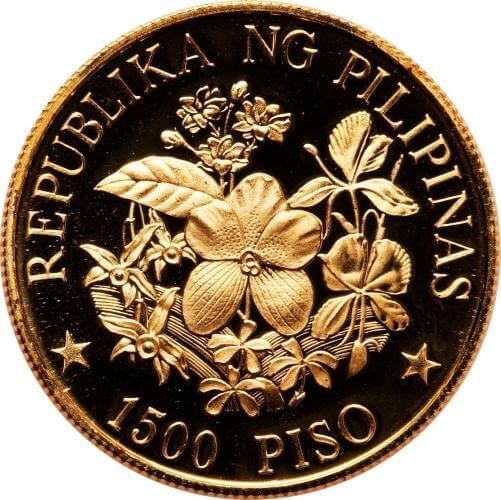 the flower motif on the 1,500 Piso gold coin from 1978 shows perhaps the most beautiful design of all Philippine gold coins

The 1,500 Piso gold coin from 1978 was issued to commemorate the inauguration of new mint facilities. Its reverse side shows images of gold bars, paper currency and coins as well as the new security printing plant and gold refinery/mint. In Buy-Gold.Link’s opinion, this coin is the most beautiful of all the Philippine gold coins. The charming flower motif on its obverse side was probably chosen in an effort to appeal to a wider audience of potential coin collectors. That didn’t seem to work though as only 6,000 coins were issued in total (3,000 BU and 3,000 proof). 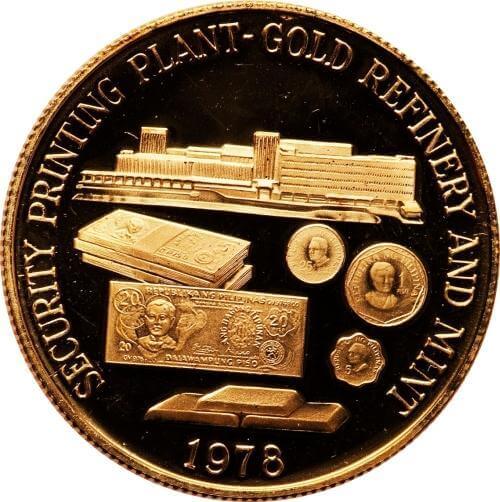 Further Philippine gold coins of at least 90% purity were issued in the years 1981/82, 1992, 1994 and 1995. The lightweight (9.95 gram, 26 mm diameter) and thin 1,500 Piso gold coin that was issued in 1981/82 was dedicated to the papal visit of the Philippines by Pope John Paul II. The obverse design of this 90% pure gold coin that shows the martyr Lorenzo Ruiz could have been the most intricate and detailed but was so poorly realized that it resembles more a surreal painting.

The 6th anniversary of the restoration of democracy in the Philippines was the theme of a fairly large (33.55 gram, 32.7 mm) 92.5% pure 10,000 Pesos gold coin that was issued in 1992. The new president Corazon C. Aquino can be seen smiling on the obverse side of this beautiful proof coin (mintage of 1,600 coins).

In addition to the gold coins that are mentioned on this page which are all of at least 90% purity, additional Philippine gold coins of lesser purity as well as gold-plated coins were issued in some years.