One of the things that people have to learn about any new field they engage in is some specific vocabulary. In recent articles such as the ones about replica coins and junk silver coins, we have already attempted to clarify some specific coin-related words. In this article, we will attempt to clarify what pattern coins are and give some specific reasons/examples when such coins are fabricated by a mint.

Simply put, pattern coins are prototypes. Just like prototypes are made in other industries, mints produce pattern coins for a variety of possible reasons. Perhaps the most common reason for a mint to produce some pattern coins is when a new coin type/denomination is under discussion but hasn’t been approved yet. Some new coins (such as numismatic coins) can be approved by the mint itself whereas legal tender coins need to be approved by legislature. In both cases, the mint would produce some pattern coins and then show/give them to decision makers such as politicians or the mint director. The decision makers will then evaluate the look of the pattern coin (and the cost of producing it) in order to decide whether the new coin shall be approved for regular production or not.

Obviously, most pattern coins will never be approved for regular production (just like most car prototypes will never be approved for mass production) and the surviving pattern coins of such failed projects are often especially valuable. Those pattern coins that are approved for regular production can sometimes be difficult to distinguish from the regular coins as they generally look exactly the same (unless they were struck in a different metal or when some tiny last-minute changes were made). The only giveaway in that case is the date of mintage. Since the approval process can take quite some time, sometimes even several years, a pattern coin will generally bear an earlier year date then the coins that were produced during the first year of mass production.

Why pattern coins are produced?

Below, we have made a list of some common reasons that may necessitate the production of pattern coins:

1. The most common reason is to test out how a new design would look on a real coin instead of just in a drawing or on the computer screen. After dies with the new design have been created, they need to be tested. In the case of precious metal coins, such pattern coins were sometimes struck in different metals such as copper or aluminum in order to avoid wasting valuable precious metals. Sometimes a new design may prove to be too difficult to create even after the creation of several new dies and test pattern coins.

2. Pattern coins are also produced to test out new minting techniques. That could for example be the production of holographic/hologram coins which is a new field that more and more mints start to engage in. Check out our recent blog article about holographic coins to learn more about this exciting new minting technology.

3. A mint would typically also produce pattern coins when it plans to produce coins in new sizes. When using a design on a smaller coin that was previously used on a larger coin for example, it is important to test it out first. The amount of intermediate space between two design elements is sharply reduced when applying the same design to a smaller coin. That could result in the design elements blurring together at their edges.

4. New coin formats such as coins with a hole in the middle (which was very common in ancient China) also need to be tested before regular production can begin. The United States Mint once experimented with $1 gold coins with holes in the center but these coins were never approved for regular production. Instead of issuing such coins, the US Mint instead opted to make the $1 gold coins thinner.

5. Finally, pattern coins are also produced to test new metals and metal alloys. An example could be when silver is added to an alloy that previously only contained gold and copper. Adding a new metal changes the flow of the material when the blank coin planchet is struck. Sometimes even non-metal materials are tested for their suitability to be used as coins. During World War II, the US Mint for example produced some pattern coins out of plastic and even glass. The rationale behind this of course was to save all metals for the war effort. 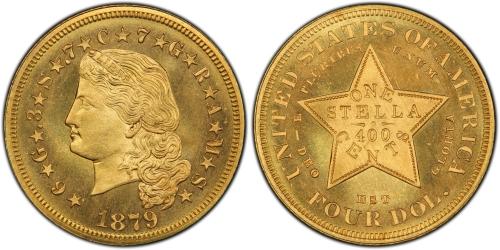 All pattern coins are a lot more valuable than standard coins due to their rarity. There is however considerable variation in their value depending on their backstory. A rare pattern coin with a historical background can possibly fetch millions at an auction, whereas other pattern coins are ‘only’ worth thousands. A pattern of a $4 gold piece from 1879/1880 can for example be worth up to 1.5 million USD! That alone could be motivation for some to finally clean up their grandparents attic. You never know what you might find there! 😉