When people think of gold medals as opposed to gold coins, the Olympic gold medals usually come to mind first. However, it has been quite a long time that the gold medals for the winners of the Olympic sports events were made out of solid gold. More on that later in the article.

At the latest Summer Olympics in Brazil’s Rio de Janeiro in 2016, each gold medal only contained 6 grams of gold out of a total weight of 500 grams. The remaining 494 grams that make up the core of the medal were made out of 92.5% pure Sterling silver. The 99.9% pure thin gold plating then gave the gold medal its expected outward appearance. Both the 6 gram gold plating and the 92.5% purity of the silver core are the minimum standard that is regulated by the International Olympic Committee.

The gold medals at the recent Olympic Winter Games in South Korea’s PyeongChang were a bit heavier – 586 grams – than those in Rio in 2016. The purity of their silver core was also higher with 99.9%. The 6 gram gold plating was the same though.

Even though gold medals that are in fact only gold-plated are the norm at the Olympic Games and other high-profile sports events, there was a time when medals out of solid gold were given to the Olympic champions. The last time this was done was in 1912 for the Summer Olympic Games in Sweden’s capital of Stockholm.

That year, the medals depicted two female figures that are placing a crown atop an athlete on the obverse and an image of a herald that is opening the games and a bust of Pehr Henrik Ling (a Swedish gymnastics pioneer) on the reverse. The 1.5 mm thick gold medals weighed only 24 grams and measured 33.4 mm in diameter. 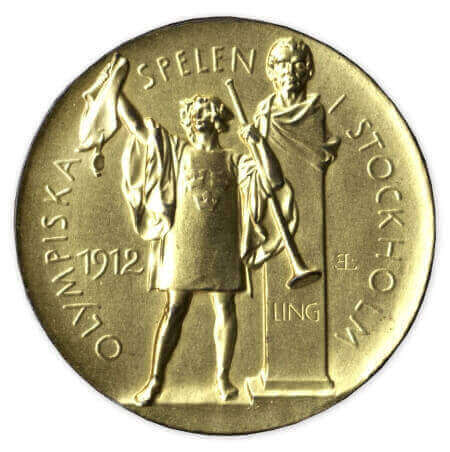 The Olympic gold medals were made out of solid gold for the Olympic Games in the years 1900, 1904 and 1908 as well. The 1900 Paris games in fact introduced the custom of handing out gold medals and the medals were not round but rectangular! The 3.2 mm thick rectangular medals measured 59 mm x 41 mm and weighed 53 grams. They depicted a relief of Nike – the goddess of Victory – that is holding a wreath on the obverse side. The reverse displayed a winning athlete in front of a landscape.

The Olympic gold medals in 1904 in St Louis were the first to have the nowadays expected round shape and measured 37.8 mm in diameter and 3.5 mm in thickness. The ancient Greek goddess Nike appeared on the obverse side again gesturing to a victory wreath. On the reverse, an athlete that is holding a laurel victory crown stands in front of stylized depictions of the Olympic disciplines.

In 1908 in London, the medals were a bit smaller (33 mm diameter) and thicker (4.4 mm) but also weighed 21 grams like the four years prior. Their obverse side showed the same image of two women crowning a victorious athlete that would be used again four years later in Stockholm. The old theme of St. George slaying a dragon that also inspired the reverse design of the British Gold Sovereign coins was depicted on the reverse.