Most precious metal investors are aware of the fact that some of the world’s most popular bullion coins are not only manufactured in the standard size of 1 oz. Fractional sizes of 1/2 oz, 1/4 oz, 1/10 oz and 1/20 oz are fairly commonplace and even smaller coin sizes like 1/40 oz, 1 gram and 1/2 gram are being produced by some renowned government mints. However, the record holder for the world’s smallest gold coin came from Switzerland since 2020!

That 99.99% pure 1/500 oz gold coin that only measures 2.96 mm in diameter was already highlighted on this blog in January 2020. It features the image of Albert Einstein sticking out his tongue on its reverse side. You might think that engraving such a detailed design on such a small coin is impossible. However, there already exists special laser technology that makes accomplishing such a seemingly impossible task feasible.

The German company ACSYS Lasertechnik is one of the specialists in this new field. Its Femto Laser that employs the new ACSYS PULSE FORGING technology also made the creation of the new record holder for the world’s smallest gold coin possible. The Croatian Mint just unveiled this tiniest of gold coins early this month. It weighs only 0.05 grams and only measures an incredible 1.99 millimeters in diameter! 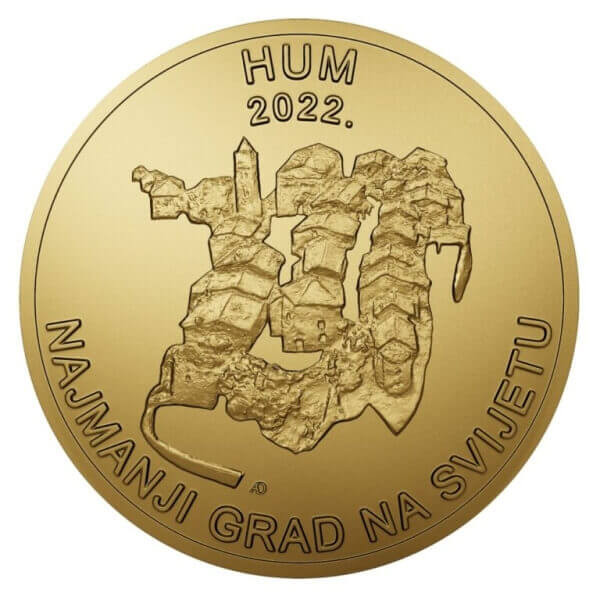 So what can be depicted on such a small surface? The reverse side of the coin shows an overview of the town of Hum, the smallest town in the world which is also located in Croatia. The face value of the coin of 1 Kuna can be seen on the obverse side along with the image of an ox. Unfortunately, you probably won’t be able to become a proud owner of the new world’s smallest gold coin as the 2-coin set that the Hum gold coin is a part of is already sold out.

This set includes another 99.99% pure gold coin of 1 oz which depicts the Višnjan Observatory, a space observatory in Istria that specializes in collecting near-Earth object (NEO) measurements. The 2 coins were issued by the Croatian National Bank and minted by the Croatian Mint. Mintage was limited to 199 pieces and if you want to learn more, you can visit this page of the Croatian Mint’s webshop as well as watch this interesting video on YouTube that also shows parts of the creation process.