Since gold bullion coins are dated like circulation coins, many gold coin collectors are looking forward to the latest issue of their favorite gold coins. On most new 2017 gold coins, the only thing that will be different compared to 2016 is the changed date. There are however some renowned gold bullion coin series that change the design on their reverse side each year. This article will focus on those gold coins with changing reverse designs for 2017.

Most 2017 gold bullion coins will stick to their same perennial design like American Gold Eagles or Canadian Gold Maple Leafs. The few brands of gold bullion coins that swap their reverse design every year already have their new 2017 gold coins out for sale as well. Two of the coins with a new reverse design for 2017 are issued by the Perth Mint, the Australian Gold Kangaroos and the Australian Lunar gold coins. China’s Gold Panda coins also have a new reverse design just like every year. Finally, Britain’s Royal Mint issues the British Shengxiao Lunar Gold coins with annually changing reverse designs. Since 2016, the Royal Mint also issues the new Queen’s Beasts bullion coin series that will also have a changed reverse side design for 2017.

The new 2017 coin design of the Australian Kangaroo coins shows a kangaroo jumping across the plain. The Perth Mint always displays a different kangaroo design on the coin’s reverse side since 1989 for proof coins and 1990 for brilliant uncirculated coins. As previously, the reverse side also displays the coins’s weight, year of mintage as well as gold purity. The obverse side of the 2017 Australian Kangaroo bullion gold coins still shows Ian Rank-Broadley’s younger portrait of Queen Elizabeth II like in previous years with the coin’s face value underneath it.

The next coin in the 2nd series of the Australian Gold Lunar coins is dedicated to the upcoming new Chinese year of the rooster, which will begin on January 28th 2017. The new 2017 coin design of the reverse side shows a rooster standing on one leg with the other leg raised between two leafy bamboo shoots. The Chinese character for “Rooster”, the Perth Mint’s mintmark “P” and the words “Year of the Rooster” are engraved on the reverse as well. The obverse side of the coins is still the same as all previous coin editions of the 2nd series and shows Ian Rank-Broadley’s portrait of Queen Elizabeth II, albeit the portrait of an older Queen (whereas the Australian Kangaroo coins show a younger effigy of the Queen).

The Chinese Panda gold coins are also known for changing their reverse side design every year. The new 2017 coin design of these perennial favorites among collectors depicts a panda sitting on its haunches with a leafy bamboo shoot in its outstretched paws and a stylized bamboo forest in the background. The obverse side design remains unchanged with its depiction of the “Hall of Prayer for Abundant Harvests” in Beijing’s Temple of Heaven. 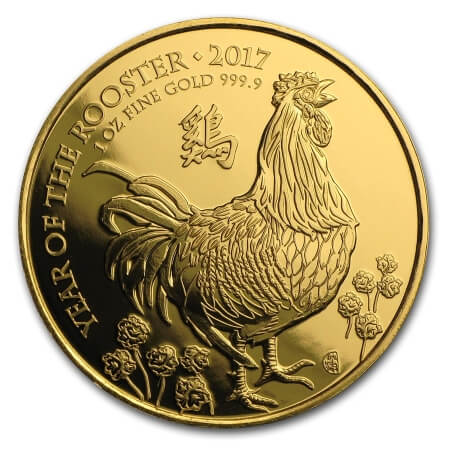 Lastly, the British Shengxiao Lunar gold coins were also already issued with their new 2017 coin design. The new 2017 gold coins of this series are dedicated to the new Chinese year of the rooster just like the Australian Lunar gold coins. A Marsh Daisy Rooster from the area of Lancashire in the North of England is depicted amidst ten Marsh Daisy (a.k.a. sea-thrift) flowers. The coin’s weight, purity and year of issuance is also inscribed on the reverse along with the Chinese character for rooster and the words “Year of the Rooster”. The choice of ten flowers is not a coincidence as the rooster is the tenth animal in the Chinese zodiac. The number ten also symbolizes perfection in Chinese culture.