Most renowned government mints in the world are from first-world countries like the US Mint, Royal Canadian Mint, British Royal Mint or Australia’s Perth Mint. However, gold coins are also regularly issued by many developing countries and even by some of the poorest countries. Earlier articles on this blog such as these ones about Philippine Gold Coins, Malaysian Kijang Emas and Zimbabwean Gold Coins have already introduced some of these exotic gold coins. This new article will introduce some Myanmar gold coins, including two new commemorative gold coin types that were just issued this month to celebrate the 75th anniversary of independence of this developing Southeast-Asian country. 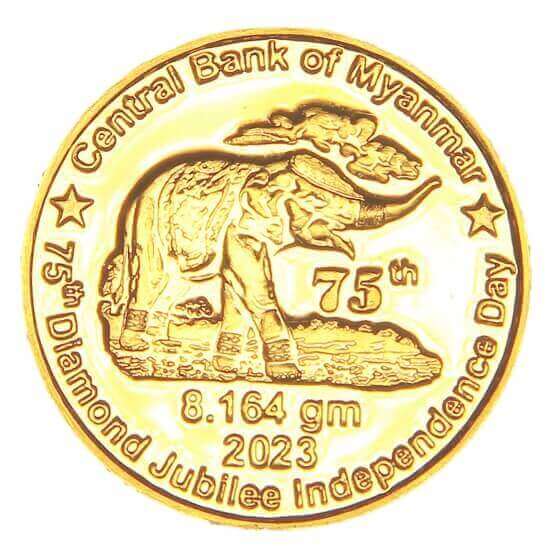 The newest Myanmar gold coins were issued just a few days ago on the 21st of December 2022. These coins that are dedicated to the 75th Myanmar Independence Day were issued in the two denominations of 1 tical and one half tical. Unusually, both sides of the coins depict the same image of a large white elephant at the center. The gold weight and year of mintage can be seen underneath the elephant’s image and the dedication to the Myanmar Independence Day as well as the name of the country’s Central Bank are engraved along the edge of the coin (in English on one side of the coin and in Burmese on the other side). The coins will be exclusively available for purchase at the shops of the Myanmar Gems Enterprise from the 5th of January 2023.

Myanmar issued gold coins in other recent years as well. In 2019 for example, the national hero General Aung San was depicted on commemorative half-tical gold coins. Precious metal coins out of gold and silver were already issued in Myanmar in the 1800’s, so long before the country gained its independence. However, collectors will find it hard to obtain Myanmar gold or silver coins due to the low mintage numbers and relative isolation of the country from international markets. In recent years, economic sanctions that were imposed on Myanmar in general and the Myanmar Gems Enterprise in particular by the always-meddling imperialist US government have added another level of difficulty for Western collectors wishing to obtain precious metal coins from this isolated Southeast Asian country.