Even though most people reading this page probably prefer to buy gold bullion coins from the world’s leading government mints, there is no doubt that the market for numismatic gold coins is growing as well. One of the joys of a coin collector is to obtain coins from countries that are perceived to be somewhat exotic. The small Asian country of Mongolia definitely fits that description. Mongolia has several gold mines near its capital city Ulaanbaatar and some of that gold has been used to mint Mongolian gold coins since the early 1970’s. However, the production of the coins was and is mostly done by foreign mints. This page introduces those that are interested to the history of Mongolian coinage in great detail.

The first numismatic Mongolian gold coin that was issued by the Bank of Mongolia in 1971 had been minted in East Germany. It was dedicated to the 50th anniversary of the Mongolian revolution. With a weight of 30 grams and 32 mm in diameter, it was also a much larger gold coin than the ones that Mongolia has issued in recent years. Most Mongolian gold coins that have been issued in the years since then were fairly small (up to 1/2 oz) and their gold purity was 90% until 1990. In 1991, their gold purity was raised to 99.9%. Obtaining some of the older Mongolian gold coins that are listed on this page should be fairly difficult these days but APMEX currently has one of these early issues from 1980 available that was dedicated to the International Year of the Child.

Another characteristic of gold coins from Mongolia is that they seem to be exclusively issued with a proof finish. That makes it clear that these low-mintage commemorative gold coins are issued for collectors as a target audience. Higher mintage brilliant uncirculated gold coins targeted at investors don’t seem to exist yet. That situation might change relatively soon though as gold production in Mongolia is ramping up rapidly nowadays after having gone through a slump the previous decade.

In terms of gold purity, Mongolian gold coins are already up to the international standard today as all the recently issued coins are 99.99% pure. That is not surprising as the coin issues of recent years have all been produced by CIT (Coin Invest Trust) from Liechtenstein on behalf of the Bank of Mongolia. Some of the coin designs are highly original like the Mongolian Nature series or the Evolution of Life series. The Mongolian Central Bank has even announced recently that it will issue commemorative coins (probably out of silver) with the image of the Mongolian rock band “The Hu”. 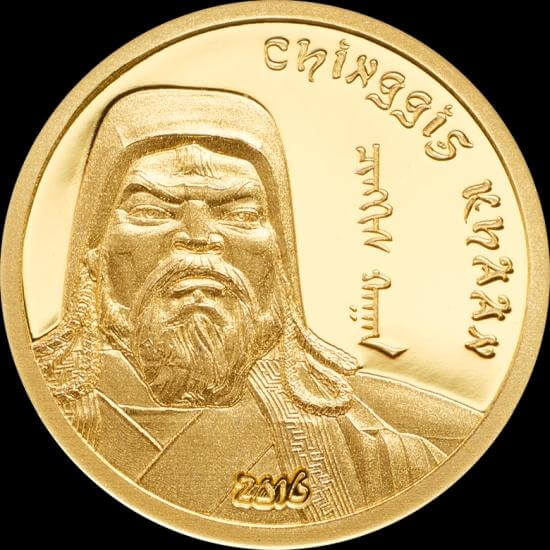 There is probably no better motif for Mongolian gold coins than the image of Genghis Khan!

Other Mongolian gold coins depict common designs such as the profiles of famous people like Mahatma Gandhi or lunar zodiac-themed motifs. The most famous Mongolian of all time – Genghis Khan – has also been featured on Mongolian gold coins and silver coins, not just once but many times over the years. The most recent Genghis Khan issue that came out in 2016 is perhaps the easiest to obtain among them with a bit of luck.