Most readers of this blog will certainly be familiar with the difference between brilliant uncirculated and proof coins, antique (historic) and newly issued coins etc. The concept of modified bullion coins however is still a bit obscure as it’s mostly smaller private mints and coin dealers that engage in this practice.

So what exactly are modified bullion coins? In simple words, a modified bullion coin is the result of taking a regular bullion coin (usually a brilliant uncirculated coin) and modifying its appearance in some way in an effort to make it more appealing to collectors. Since bullion coins are generally produced in large quantities, they are mostly bought by investors and not collectors. The high production quantity keeps the production costs per unit low for the producing mint and that results in the coins being sold for low premiums.

Collectors on the other hand are mostly attracted by the relative rarity of a coin (as well as certain specialties regarding to its appearance like special mint marks or design features) instead of low premiums. In fact, many collectors quite happily pay substantial premiums (often more than double the precious metal value of the bullion coin) for rare coins. Brilliant uncirculated bullion coins are generally not rare however so how do you make them appear rare and special in the eyes of such collectors? Some smaller private mints have found out that secret which is to turn regular brilliant uncirculated bullion coins into modified bullion coins.

How to create modified bullion coins?

So how do you modify a bullion coin? One relatively simple way to modify a coin’s appearance is to colorize it. Colorization is usually applied selectively, that means that color is only applied to certain parts of the design to make those stand out more. Whereas the application of color is part of the production process for some mints that have colored coins in their lineup to begin with, other smaller private mints buy up finished brilliant uncirculated coins and then colorize them.

Emporium Hamburg is one coin dealer in Germany that does that for example with Chinese Silver Panda coins. Colorized Silver Panda coins can therefore be regarded as modified bullion coins. On the other hand, it could be argued that the Perth Mint‘s colorized Australian Silver Lunar coins aren’t modified bullion coins since the colorization process has been a regular scheduled part of the production process all along and is done by the same mint that produces the coins to begin with.

Another way to modify the appearance of a bullion coin and to thereby increase its appeal to collectors is to apply gold plating (gilding). While it’s certainly possible to have the entire surface of the coin gilded, it is much more common to use such gold plating selectively in order to have certain design elements of the coin stand out more.

Gold is not the only precious metal though that can be used to plate a coin. Allcollect is a coin trading wholesaler in Germany that has attracted a lot of attention among coin enthusiasts worldwide with its Golden Enigma series of modified bullion coins. For this series, Allcollect has had many of the world’s most renowned silver bullion coins such as the American Silver Eagles, Canadian Silver Maple Leafs, British Silver Britannias etc. modified (plus other coins from smaller mints). 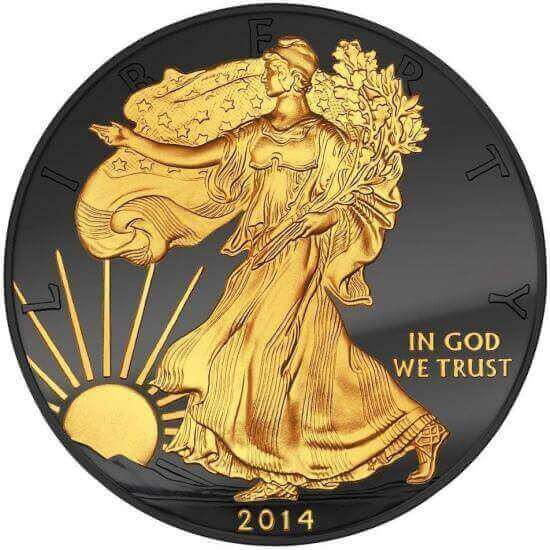 The type of coin modification of this series is unique in that it not only uses selective gold plating to make the coins’ most important design elements stand out but also has the entire surface of the coins plated with one of the rarest precious metals in the world, black ruthenium! Both the obverse and reverse side of the coins are fully plated with this rare metal of the platinum group of metals whereas the design elements are plated with 24 karat gold. The result is visually spectacular, so it’s no wonder that most issues of the Golden Enigma series of modified bullion coins are sold out.

For the modifying mint or dealer, plating and gilding a regular brilliant uncirculated bullion coin is highly profitable. After all, brilliant uncirculated coins can usually be purchased for premiums as low as 3 – 4% and the modified coins can then be sold for more than double their original pre-modification value. However, potential buyers should take note that a modified bullion coin can no longer be considered an official part of the coin series and might therefore be difficult to sell back to coin dealers/shops. Certain collectors might be willing to pay high premiums for such coins though.