When checking out the content of a blog about precious metals, I’m sure you didn’t expect to find the name of a famous cartoon mouse mentioned. However, Mickey Mouse gold coins (as well as silver coins) do exist and they are made out of 99.99% pure gold. Even though such coins are obviously aimed at collectors instead of investors, they might still be interesting for investors in the form of gifts to their children.

Please allow me to explain. I’m sure some of you serious investors have tried to explain the concept of investing to your children. For an average child growing up these days in a consumerist world that is focused on instant gratification, learning about investing (which is after all based on delayed gratification) is about as interesting as watching paint dry. Most kids love the Disney characters though.

If you are a coin collector/investor and want your young kids to develop an interest in coin collecting and/or investing, I can’t think of a better gift that could get them started along this journey than offering one of these Mickey Mouse gold coins. Such a gift doesn’t even have to be that expensive since the smallest of these coins weighs just 0.5 grams.

Precious metal coins with Disney motifs were released by different mints in the past. However, for this article I want to focus on a particular coin series named “Mickey through the Ages” which was released by the New Zealand Mint between 2016 and 2017. Altogether, this coin series consists of five different designs and four different proof coins for each release.

First and foremost there are 99.99% pure gold coins in the three sizes of 1 oz (mintage limit per design of 500 coins), 1/4 oz (1,000 coins) and 1/2 gram (5,000 coins). However, the series also includes 99.9% pure 1 oz silver coins. These also differ from the gold coins in that they show a colorized version of the respective reverse design. The 1 oz “Mickey through the Ages” silver proof coins should also be the easiest to find available for purchase online since their mintage limit was set at 10,000 coins per design. All the coins of the series are backed by the government of the South Pacific island of Niue and therefore have an official face value (in NZD – New Zealand Dollars – which is the official currency of Niue).

On the obverse side of both the Mickey gold coins as well as the 1 oz silver coins of the series you will find Ian Rank-Broadley’s portrait of the British Queen Elizabeth II that has been in use since 1998 and that for example also still appeared on the Australian Gold Kangaroo coins until 2018.

The five different Mickey Mouse designs on the reverse side of the coins all have quite a bit of history behind them. The first design is based upon the first-ever Mickey Mouse film in full color, the animated short “The Band Concert” which was released in 1935. It shows Mickey standing on a small soapbox as the conductor of a band. In the 2nd design, you see Mickey as a tailor with a large scissor in hand. It was inspired by the animated film from 1938 “Brave Little Tailor” in which Mickey is tasked with killing a giant which has terrorized his town. 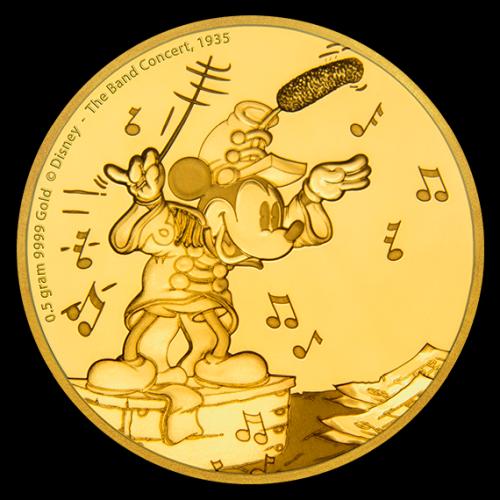 The 3rd reverse coin design of these Mickey Mouse gold coins (and the colored silver coin) was inspired by the 1928 animated short “Plane Crazy” and shows Mickey in the cockpit of his plane holding the horseshoe that his girlfriend Minnie Mouse had given him for good luck. On the reverse of the 4th set of coins of the series, you’ll see Mickey directing a broom that carries two buckets of water for him. This is a scene from the 1940 feature film “Fantasia” (which was Disney’s third-ever feature film) in which Mickey plays the role of a sorcerer’s apprentice.

The final 5th design of the “Mickey through the Ages” coin series was inspired by the animated short “The Gallopin’ Gaucho” which was released in 1928 as only the second-ever film to feature Mickey Mouse. In this six-minute silent film Mickey plays the role of an Argentinian gaucho. Typical for that South American country is the Tango so it was a fitting choice to select the film’s tango scene as inspiration for the reverse design of these coins.

All coins of the series were produced and issued by the New Zealand Mint which is a private mint that is based in Auckland. As the only mint in that country, it produces a variety of collectible bullion coins, mostly for island nations in the South Pacific. New Zealand’s official currency on the other hand is jointly produced by the Royal Canadian Mint and Britain’s Royal Mint. By the way, the “Mickey through the Ages” coins are not the only Disney-themed precious metal coins of the New Zealand Mint. In an earlier article on this blog, Buy-Gold.Link already introduced some of the mint’s other Disney gold coins.