The first Maple Leaf Forever gold coins were issued in 2012 in the two denominations of 1/10 oz (CAD $ 5 face value) and 5 oz (CAD $ 500 face value). Whereas 25,000 pieces of the smaller coins were produced that year, mintage of the 5 oz proof version was limited to only 200 pieces. These initial coin issues not only depicted a different maple image on the reverse side than the regular bullion version but also had the face value and year of mintage engraved on the reverse side (both appear on the obverse side of the bullion version of the Gold Maple Leafs).

The next issue of Maple Leaf Forever gold coins occurred in the year 2015 when an extremely limited mintage of 10 large 1 kg coins were released. The reverse maple leaf design of these proof coins featured a hologram and was the first coin of the Royal Canadian Mint that had a hologram struck over an engraved surface. The coins that measured 101.6 mm in diameter and that had an official face value of CAD $ 2,500 had their maple leaf design on the reverse created by the Canadian artist Celia Godkin. 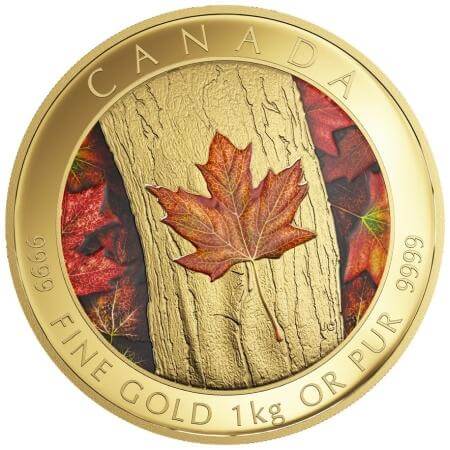 You can see images of the different maple leaf designs that appeared on the different issues of all these special collectible gold coins in the image slider on our main page for the Canadian Gold Maple Leafs.