This blog already featured many articles in the past about exotic gold coins such as Mongolian gold coins or Philippine gold coins. This new article now is about another exotic gold coin from a rapidly developing country in Asia, the country of Malaysia. When Malaysia first issued its own gold bullion coins – the Malaysian Kijang Emas – on 17 July 2001, it became the 12th country in the world to do so. The coins were however only minted for 3 years until 2003. Buyers that live in Malaysia can buy them at these 31 selected Maybank branches.

Just like most other contemporary gold bullion coins, the Malaysian Kijang Emas were minted out of 99.99% pure gold. The coins were produced by the Royal Mint of Malaysia under authority of the Malaysia Central Bank (Bank Negara Malaysia) in the denominations of 1 oz, 1/2 oz and 1/4 oz. The 1 oz coins measure 37 mm in diameter and have an official face value of 200 Malaysian Ringgit. The fractional 1/2 oz and 1/4 oz coins respectively measure 28 mm and 22 mm in diameter and their respective face values are RM 100 and RM 50. 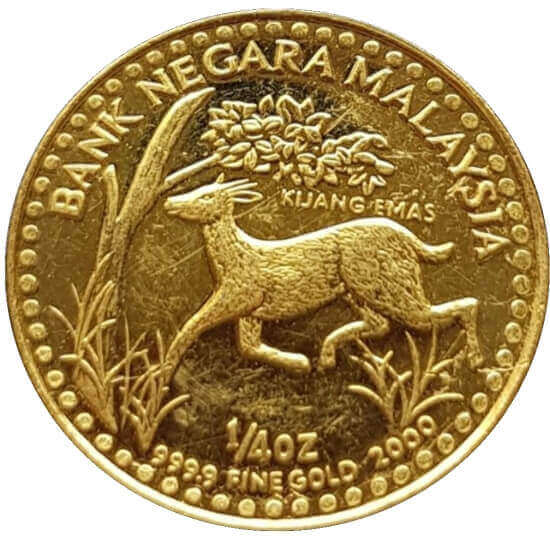