The previous article on this blog introduced the collectible silver niobium coins from Austria that are still being minted each year. However, there exists another popular collectible coin series that is comprised of bimetallic coins out of silver and the rare precious metal of niobium. These are the Luxembourg silver niobium coins that were first minted in 2009. Luxembourg is a very small country in Europe that is nevertheless a full member of the European Union and that therefore uses the Euro as its official currency.

It is no coincidence that the Luxembourg silver niobium coins look very similar to the Austrian silver niobium coins. After all, the same mint produces both coin series. However, whereas the Austrian Mint still issues a new version of its own collectible bimetallic coins in every year, it only produced the similar-looking bimetallic coins for its neighboring country of Luxembourg until 2019. The only major difference between the two coin series is the theme which inspires the reverse design of every coin issue.

All issues of the Luxembourg silver niobium coins depict one of Luxembourg’s medieval castles on their reverse side. The castle of Vianden was depicted on the inaugural 2009 issue of the coins and the castle of Bourglinster appeared on the reverse of the final 2019 coin issue. Nine other Luxembourg castles were depicted in the other years in between. 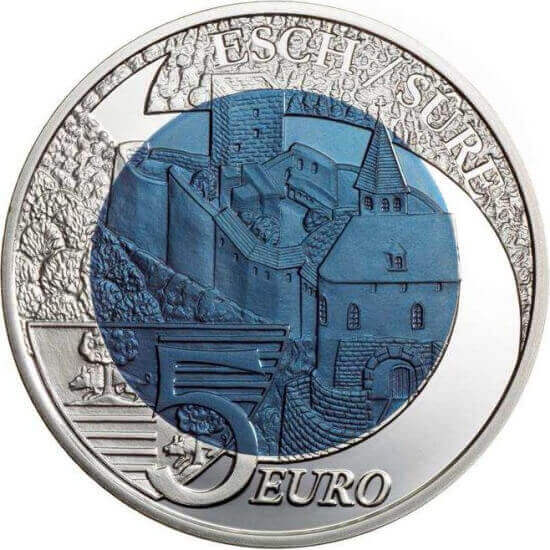 All coins of this bimetallic coin series from Luxembourg have an official face value of 5 Euros and measure 34 mm in diameter. Annual mintage numbers of the coins started out with 7,500 BU coins in the first year and then settled at 3,000 coins for the remaining years. The 2014 and 2015 coins were issued with a proof-like finish but all other coins of the series were brilliant uncirculated coins.

The colored core of the Luxembourg silver niobium coins is made of 99.9% pure niobium. An outer ring of 92.5% pure silver surrounds that core. Each of the coins that weigh 16.6 grams bears the same profile portrait of the Grand Duke Henri on the obverse which also contains the name of the issuing country and the year of mintage. Check out this page to find linked images for every coin issue of this collectible series!